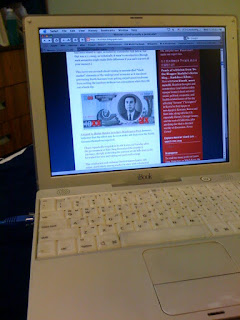 ... And it still works. My new MacBook Pro is making a weird grinding sound which has earned it a trip to the Apple Store in Waikiki.

Fortunately, I never throw anything away, so I still have the Mac I bought in August 2001 in OC, on a lengthy road trip through the Southwest just weeks before 9/11.

It's not capable of running anything beyond OSX 10.3.9, so it's like going back in time and losing a lot of functionality that I'm used to now (like two-finger trackpad navigation). And it's only 500MHz (0.5GHz would be a better way to describe it), just one-fifth of my MacBook Pro's capacity, so it's slow, but it gets the job done.

In fact, this sturdy little slab (it does indeed feel like a brick in weight) was what I blogged on back in 2005 and 2006, and it was my primary computer for five years, which is a testament to Apple's engineering of both software and hardware. I replaced it in early August 2006, literally within hours of my arrival in Hawaii, with a MacBook Pro that I replaced recently only after the infamous Grapefruit Juice Incident.

Anyway, It's nice that something so old and supposedly obsolete can still not just operate, but actually be useful.