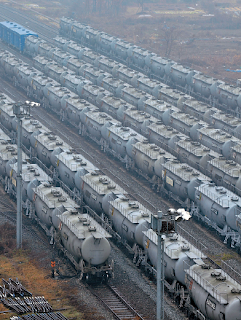 We're getting word now that the railway workers' union has called off their strike, at least tempoarily, as they buckle under pressure from the Lee Myungbak government that refused to compromise with the labor group even though cargo transport was held up. From Reuters:


State-run Korail had broken off talks with the union last week, calling its demands for a pay hike and reinstatement of fired members unreasonable. It has been using non-union workers and military engineers to try to keep services running.

The union said it was suspending the strike temporarily to regroup, but management said it was effectively a surrender.

"We are calling on comrade members to briefly return to the workplace so we can prepare for a new strike," the union said in a statement. "We have not been able to achieve our demands."

The government on Tuesday vowed there would be no compromise, calling the strike illegal.

The refusal to resume negotiations by management reflected the hard line against militant unions by Lee, who has pledged to end years of disruptive labour action he says is undermining South Korea's competitiveness.


"Comrade members"? Geez, are we not even trying to disguise our loyalties anymore, chinboista? Anyway, this may be only a temporary stoppage to the work stoppage, so we'll have to see how this goes. 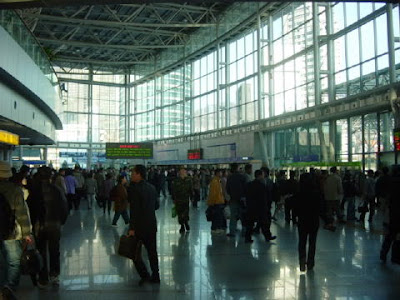 Meanwhile, back at the Hall of Justice... authorities are saying that Seoul Station (that's Kushibo's 'hood) has received not one, not two, not three, but five bomb threats on Thursday. The text messages came at about 10 a.m., after which seventy police investigators rushed to the railway station to search for explosives (well, there's a way to wipe out half the detective squad). They found nothing, but that may be because [insert your own joke here about police laziness and/or incompetence].

One text message read: "I can't stand the delayed train schedule. I will blow up Seoul Station at noon today." Clever, because bomb threats are a proven method to get transportation up and running.

Police have put out an APB for a stupid person who doesn't realize that text messages can be traced.

I just hope it doesn't turn out to be an English teacher. Because that will just lead to new immigration regulations requiring that E2s be tested for bomb threats. And nobody wants that.