Here in Hawaii, where many Muslims from around East Asia and elsewhere are among the international student population, we have posted reminders of what dorm kitchen will be kept open late so that those following Ramadan restrictions can prepare meals and eat after dark.
Meanwhile, five thousand miles away in Washington, President Barack Hussein Obama has invited a wide range of dignitaries from various countries with a predominantly Muslim population to a White House dinner celebrating the Islamic holy month of Ramandan. Guests also included American Muslims, such as a high school basketball player from Massachusetts who had scored 3000 points, breaking her state's record. 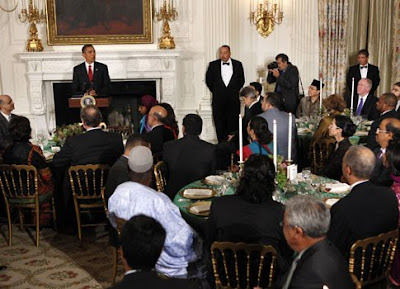 One thing I thought was noteworthy was that the Israeli ambassador was also in attendance. Indeed, the US is in a unique position to bring together parties that might not always trust each other. I don't think it's just Obama who sees the importance of this; George W. Bush attempted to be a bridge as well (though his ill-conceived war in Iraq may have put a damper on that), and is the one to be credited with starting the Ramadan dinner tradition in the first place.
But it's not just about Mideast peace. Obama has a message to bring to Americans about their 2.35 million Muslim compatriots:

Tonight's iftar is a ritual that is also being carried out this Ramadan at kitchen tables and mosques in all 50 states. Islam, as we know, is part of America. And like the broader American citizenry, the American Muslim community is one of extraordinary dynamism and diversity — with families that stretch back generations and more recent immigrants; with Muslims of countless races and ethnicities, and with roots in every corner of the world.

Indeed, the contribution of Muslims to the United States are too long to catalog because Muslims are so interwoven into the fabric of our communities and our country. American Muslims are successful in business and entertainment; in the arts and athletics; in science and in medicine. Above all, they are successful parents, good neighbors and active citizens.

I recognize that rapid change that leads to long-established residents feeling like strangers in their own neighborhood can lead to difficult social or cultural circumstances, but the Muslim population is not growing so fast as to precipitate that. Rather, it is exclusionary practices that marginalize members of newer groups that present the greater threat.
Finally, I also like to point out that "Arab" and "Muslim" are not interchangeable concepts, even though many Americans seem to treat them as such. In America, most Arabs are not Muslim, and most Muslims are not Arab. Around the world, of course, the largest Muslim countries are not Arab at all: the top ten include Indonesia, Pakistan, India, Bangladesh, Turkey, Nigeria, and Iran. Only three predominantly Arab countries are in the top ten: Egypt at #6, Algeria at #9, and Morocco at #10.
on September 03, 2009