In praise of the korani

Inspired by this post at Gusts of Popular Feeling, one of my favorite blogs, I decided to write something about the korani [고라니; also spelled gorani], also known as the Korean water deer (Hydropotes inermis argyropus).

As Matt writes, many of these creatures end up as roadkill on Korea's highways, and the transportation authorities are looking into using the sounds of tigers or even their droppings in order to deter them from the roadways. Indeed, the tiger threat is gone, but there are still the pony, the mustang, the musso, and the twin dragons. 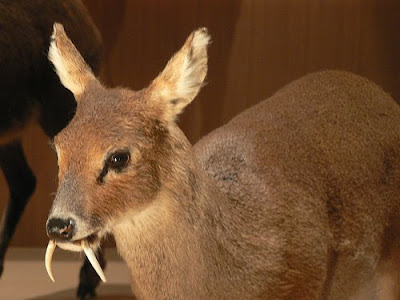 Anyhoo, I once worked on a documentary on high-elevation farming in Korea. I learned that the korani (I want that word to catch on in English) were the scourge of the farmers, often digging up their tubers and cabbage.

Those suckers have tusks! Kinda cool.

I suppose that if I were one of those travelogue writers of yesteryear, coming to Korea and trying to find an animal or other entity that represented the country, its people, or its spirit — or if I were a wise Buddhist monk who encountered such a travelogue writer and needed to find such a representation with which to humor him or her — I would have chosen the korani.

It's a creature that may seem timid, but has staying power, the ability to use all at its disposal — notably its tusks and its perseverance — to scrounge out an existence where none others could. It may look cute and, to the uninitiated, easily subdued, but it will rip you apart if you tried to take it down. (And it gets run over way too often; sort of an allegory for those too rooted in the past unable to handle the present.)