Emmy-winning M*A*S*H developer Larry Gelbart, the bane of image-sensitive Koreans and Asian activists ever since the popular show debuted in the early 1970s, has died at the age of 81.

With as storied a career as he has had, the Los Angeles Times story includes a number of quotes by big names who remember him fondly, including Carl Reiner and Woody Allen.

Of course, it is his creation of the TV show M*A*S*H that earns him a mention from me. From the LAT:

For many, Gelbart is best remembered for his work on "MASH," the long-running series whose blend of laughter and tragedy made TV history.

Set in the 4077th Mobile Army Surgical Hospital during the Korean War, TV's "MASH" grew out of director Robert Altman's hit 1970 movie written by Ring Lardner Jr., which was based on the 1968 novel by Richard Hooker (the pen name of Dr. Richard Hornberger, who had been a military surgeon in Korea).

Gelbart and his family were living in London, and he was producing the British TV show "The Marty Feldman Comedy Machine" in 1971 when producer-director Gene Reynolds called him about writing a pilot script for a TV series based on "MASH."

In writing the pilot, Gelbart recalled in his 1998 memoir "Laughing Matters," he knew that it "was going to have to be a whole lot more than funny. Funny was easy. How not to trivialize human suffering by trying to be comic about it, that was the challenge."

"MASH" debuted on CBS in 1972, with Gelbart serving as executive script consultant. He and Reynolds were both executive producers of the show -- and shared Emmys -- when it won the award for outstanding comedy series in 1974.

Gelbart's influence on "MASH," Reynolds told the New York Times in 1989, was "seminal, basic and enormous."

As for the regulation-breaking surgeon Hawkeye Pierce -- the lead character played by Alan Alda -- Gelbart told the New York Times, "I didn't have to think of why he was saying what he said. He was saying what I felt. I mean, he is an idealized me."

Hawkeye, he said, "is capable -- that is, at work, at what he does. He's an idealist. He's a romantic. Somebody who cares about himself and other people. He's often frustrated by whatever particular system he finds himself fighting against."

"MASH" ran for 11 years. But Gelbart's involvement ended in 1976 after four years and 97 episodes. As he later told The Times, "After four years, I had given it my best, my worst and everything in between."

My own take on M*A*S*H is a more generous one than that of, say, a kyopo activist at Berkeley. While M*A*S*H the movie and M*A*S*H the television show clearly began as a statement about the Vietnam War, after a few seasons the creators of the show realized that the Korean War was its own tragedy and Korea its own place, and they started focusing on the Korean War experience (from both American and South Korean perspectives) in its own right.

As I've mentioned before, without M*A*S*H, the euphemistically named Korean Conflict might have remained "the forgotten war." 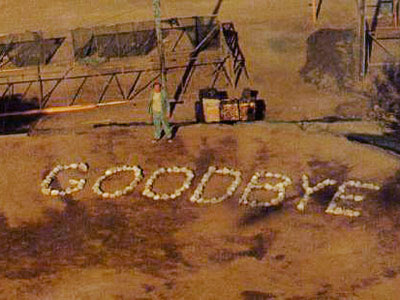