Yonhap is reporting that 26-year-old First Lieutenant Kim Hyosun (김효선) has become the second female KF-16 fighter pilot. South Korea lifted the ban on women flying military planes only seven years ago, and since then thirty-one women have become ROK Air Force pilots, with thirteen of them being actual fighter pilots. 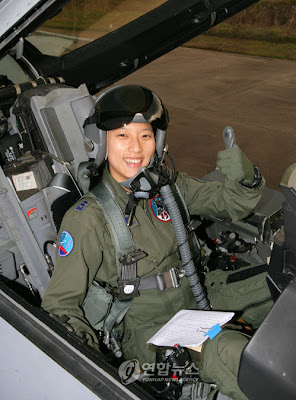 More and more, South Korean women are finding good careers in the military, which is wonderful, because I like a woman in uniform. It's not just army nurses that do it for me, but other officers, too. There's something enticing about First Lieutenant Kim's smile plus knowledge of the fact that she could take down my apartment block.

You had me at hellcat.