The Kim Who Wasn't There 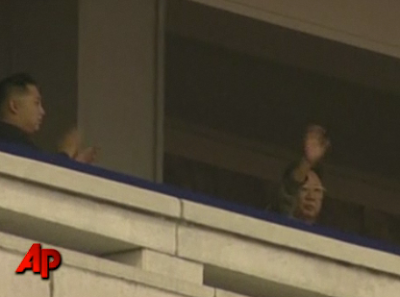 Yesterday, upon the stair,
I met a man who wasn’t there
He wasn’t there again today
I wish, I wish he’d go away...

In our latest edition of The Kim Who Wasn't There™, we'll take a look at what the KCNA has been saying about presumed future leader or North Korea, Brilliant Comrade Young General Kim Jong-un. This is necessary, considering the misleading way in which Western media (including some South Korean and Japanese news outlets) have been reporting on Kim Jong-un as if he is front and center in North Korean news reports since his debut.

Typical is this one from the Saturday edition of Japan's Asahi Shimbun:


A torrent of reports in North Korea's state-run media on the rise of Kim Jong Il's third son is driving home the message that Kim Jong Un is the reclusive country's next leader.

Since the younger Kim's debut at a key meeting of representatives of the ruling Workers' Party of Korea on Sept. 28, seemingly not a day has gone by without some mention of him.

According to Tokyo-based Radio Press, which monitors North Korean broadcasts, the state-run media has carried 13 reports on Kim Jong Un in the last month, far outstripping coverage of any other key official in the regime.

In reality, as I've noted in previous posts, there is no "torrent." While Kim Jong-un is indeed mentioned, it is nowhere near the frequency of his father, Kim Jong-il, around whom all news activity is centered like the planets around the Sun. Moreover, the freshly minted general's name is usually buried deep within the few articles in which he appears, along with the name of other elites (Open Radio North Korea reports that disapproving North Koreans have no clue even that Kim Jong-un is Kim Jong-il's son).

In other words, there really is (so far) no there there, even if the Western media (including some outlets in South Korea and Japan) insist on depicting this as if it's a done deal, in an effort to pretend that what they report is not self-replicating speculation. The reality is that we don't really know anything.

Again, using October 29* reports from the KCNA (I was planning to use Rodong Shinmun [roughly translated as Workers Daily] reports, but online at least they are generally from the KCNA anyway), let me demonstrate how small a blip Kim Jong-un is on the North Korean media radar:
In fact, I had to go back to October 26 to see the the first mention of Kim Jong-un, who was among dozens listed as joining Kim Jong-il to a visit to the Chinese People's Volunteers command (a Korean War lips-and-teeth 60th anniversary kinda ceremony), the wreath-laying ceremony at the grave of Mao Anying (son of Mao Zedong), and the meet-and-greet with the Chinese military, which were all part of the CPV anniversary.

An "also in attendance were" mention once or twice every few days is hardly a "torrent."

In fact, if our KCNA tea leaf-reading tells us anything, it's that North Korea is gradually gearing up for Chinese-style reforms. We've got visiting delegations from Dandong, China, giving gifts to Kim Jong-il, as well as the Chinese ambassador to the DPRK helping Korean farmers in rice threshing. There's also a school in Kangwon-do Province being named after a CPV "martyr" from the Korean War, Huang Jieguang, since "China has donated numbers of teaching aids and books to the school."

As I've mentioned before, the real story is not the rise of Kim Jong-un, which is looking more and more more like a soap opera sideshow, but rather the move by North Korea — either at Pyongyang's own instigation or Beijing's insistence — toward Chinese-style reforms that help integrate North Korea with China's Manchurian provinces.

UPDATE:
At long last, some in the Western media seem to be waking up to this message.

*At the time of writing this post, I chose October 29 because it was the most recent date available. However, this is hardly an aberration: For the entire month of October, Uriminzokkiri lists sixty-eight articles with Kim Jong-il in the headline, eleven with Kim Ilsung, one with Kim Yongnam, one with Choe Yongnim, one with Kim Chongsuk, but zero with Kim Jong-un's name.

Email ThisBlogThis!Share to TwitterShare to FacebookShare to Pinterest
Labels: Kim Jong-un, Manchurianization of North Korea, The Kim Who Wasn't There™