University of Tokyo professor Masatoshi Ishikawa has created two robots, one which can throw pitches and the other that can hit them:

The pitching robot, with its three-fingered hand, can throw 90 percent of its pitches in the strike zone, won't need any relief from the bullpen and never asks for a pay raise.

The batting robot, which has a sensor to determine if pitches are strikes or balls, hits balls in the strike zone almost 100 percent of the time, doesn't swing at pitches outside the strike zone, and is guaranteed to pass all drug tests.

Ninety percent of the pitches are in the strike zone and hitting one hundred percent of all balls in the strike zone? Wow, so we have the answer to an age-old question: Is it possible to make baseball any more boring?
The other age-old question: When are you going to make the sex robots? Come on, you can call them botstitutes. Seriously, though, it's doubtful any Japanese company (or Korean) would come up with a sex-providing robot: Right now the prospect of getting laid is the only thing that makes geeks get married, so if there were another avenue for sexual fulfillment, Japan's pancaked fertility rate would drop even further (ditto with Korea). 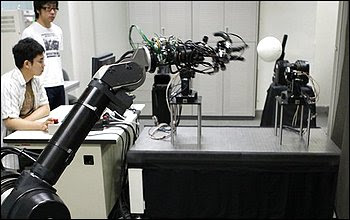