The Los Angeles Times is reporting on how the Kogi truck phenomenon — a 45-minute wait in a party atmosphere for a two-dollar fusion taco consisting of kalbi, or Korean barbecue — is spreading. And it's not just the Calbi truck, which the LAT calls "a blatant Kogi imitator, but dozens of others.
The question is, though, whether this new phenomenon is about the truck or about Kogi's kogi (meat). I mean, people are going online to follow the Kogi Roja truck to find out whether it's going to be anywhere in the area or not. Ditto with Calbi, which essentially hijacked Kogi's business model, down to the logo layout and the tweeting.
For stationary eats, Baja Fresh has started putting kalbi into their Mexican fare, so maybe it really is all about the Korean barbecue. (Baja Fresh, by the way, dropped kogi from their name, fearing a lawsuit. I wrote to them to urge them otherwise, promising even to be an expert witness if there ever were legal action. My hope is to get a free trip to California out of the deal, plus a stay in a nice hotel where I can legally play go-stop). 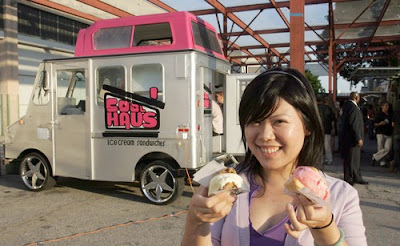 [above: This is a food truck, but it's essentially an ice cream truck, which is really nothing new; I was chasing them down back in Compton (it was a more innocent time, when chasing down a truck was not likely to draw gunfire). But Coolhaus customer Jennifer Lien looked so cute standing there with her ice cream sandwiches that I decided to put this pic up instead of one of people standing around waiting for meat. After all, despite my recent efforts to reach out to a new demographic, I still have my liking-to-see-cute-smiles core demographic to pander to.]
on July 22, 2009