Birds versus the Bard 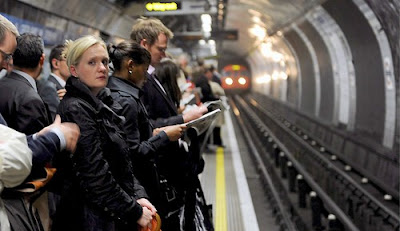 A subway commute can become gruelingly routine. Even more so if you're riding the drab Tube beneath the streets of London.
Now don't get me wrong, I think London is a great place (to visit, at least), but I couldn't help but notice how dark the Underground's tunnels were, how labyrinthine the entrances and exits were (and typically without lifts or ramps for our luggage!), and how down the people looked. And on the occasions when someone tried to end their life on the tracks, the detours just made everything worse (this happened to us two or three times in our week-long stay).
Well, authorities are trying to break the monotony at least by having subway employees read quotations from famous authors and poets. I guess that's a step up from what is (was?) done in some Seoul subway stations, piping in the sounds of chirping birds to give the illusion of nature and, well, being above ground instead of hanging out with the mole people.
on July 16, 2009