According to the Korea Times, the CIA (which actually stands for Central Intelligence Agency, but you knew that), has informed the Korean version of the CIA (which used to be the KCIA, how original) that there is a 71% chance that North Korean leader Kim Jong-il will die within five years.

CIA recently conducted a "thorough" analysis on the health status of Kim Jong-il and concluded that the chance for Kim, who has been battling the complications of stroke and diabetes, to die in five years is 71 percent, Chosun Ilbo reported Saturday, citing an unnamed government source.
CIA analysis is based on Kim's age, medical history, physical state, the timing of his stroke and the following health deteriorations. The agency then compared them with medial data base in which it found cases of patients whose physical conditions were similar to those of Kim's, before proceeding comparison.
For the analysis, CIA also relied on a number of data on Kim, including the recent photos of conducting site inspections, his brain scan image handed by South Korean intelligence agency, as well as testimonies of "ranking informants," according to the newspaper.

Given that analysis of his photos is being used by a foreign government to plot a post-demise future, is it any wonder that we've seen so many photoshopped renditions of the Dear Leader? 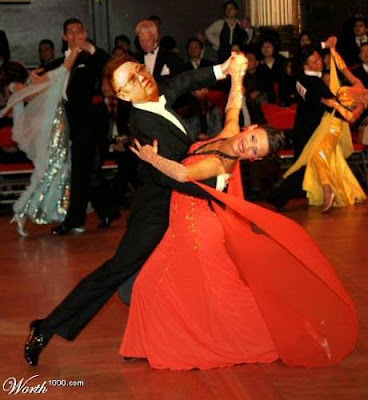 [above: Dancing With the Star of Heaven. Kim Jong-il wins every time.]
Making the Dear Leader look vibrant despite damage from a stroke is not just a matter of pride; it may be a matter of national security. According to the Washington Times, some are giving him only a year to live:

New reports from U.S. and diplomatic sources say that the health of North Korean leader Kim Jong-il continues to decline and that he may have only one more year to live.

A U.S. official who is familiar with the Korea situation but spoke on condition that he not be named said there are signs that Mr. Kim is still not well nearly a year after he suffered a stroke.

"Kim Jong-il certainly hasn't been in good shape since his stroke last year, and, as time wears on, it's increasingly clear that he's not where he was before experiencing his health setback," the official said.

Me? I'm disinclined to believe the "one year" report (also mentioned in this Korea Herald report), though it is plausible, and anyone who follows developments in Korea should be skeptical of the "home by Christmas" line.
As I've noted elsewhere, people are misconstruing the weak appearance of a stroke. A stroke is not like cancer, but more like being shot: If you survive that bullet wound, you may have long-lasting or permanent injury, but that blood clot can't do you more harm. But, of course, the next blood clot, like the next bullet, could do you in.
It is his diabetes that may portend his end.
So what does all this mean? Well, things could get interestingly dicey at any time over the next five years. And, don't sell the Dear Leader a life insurance policy unless it comes with high premiums.
on July 12, 2009