If you ever want to see Kushibo get really truly angry about something, start talking about how little South Korea(ns) do to help North Korean refugees, especially in light of what [insert other country here] does. If I'm in a good mood, all I'll do is yell something like this (or this) in your face:

Moreover, and I think this was my main reason for writing this, is that I think this meme is a dangerous one for it has — if it gains traction outside of South Korea — the potential to backfire. “Why,” someone might think, “should I care or do something about North Korean refugees (boycott Chinese goods, tell my Senator or Representative to vote on some bill that would spend money to resettle them, donate money to an NGO that helps ferry them out, pressure my government to take this issue up with Beijing, etc., etc.) when the South Koreans themselves do nothing?”

I’m not asking this from some hypothetical viewpoint either. The meme is an old one in the K-blogs, and it is spouted quite often by individuals who in fact do nothing about North Korean refugees except grouse about how little South Koreans care. The hypocrisy on that particular issue is one of the most galling forms of hypocrisy in the K-blogs.

If you feel so strongly, The Shunned, write to your MP, Representative, Senator, or whatever the hell you have where you’re from and say, “Hey, what the fu¢k are we doing about the tens or hundreds of thousands of North Korean refugees stuck in China?”

... if you really want to do something, if your outrage about the North Korean refugees comes from a true place and you’re not just using it as some bogus excuse to bash South Koreans because you hate your hagwon manager, go and volunteer to teach English the resettled or do something else to help them out. They always need volunteers.

And if I'm in a bad mood, you might need to duck to avoid getting hit by a projectile. Kushibo is usually a happy drunk (on the rare occasions when I drink), but this could make me turn dark very quickly.
I've written about this many times, including this comment on Marmot's in December 2005 where I showed that the much maligned Kim Daejung and Roh Moohyun administrations were taking in more North Korean refugees than all other administrations combined (updated statistics are found here on Wikipedia).
Sigh. There are political reasons why not all North Korean refugees in China have ended up in South Korea or elsewhere, but an economic and social factor is the limited space available at Hanawon, the facility created during the Kim Daejung administration to resettled North Korean "defectors" and to weed out would-be spies. 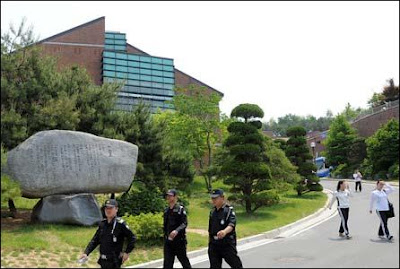 Hanawon is the subject of occasional articles that highlight the difficulties faced by North Korean refugees even in South Korea, a land populated by North Koreans' purported "brothers" (but also their former enemies, which complicates things tremendously). This past week John Glionna of the Los Angeles Times offered his take on Hanawon:

For the first time, officials on Wednesday allowed outsiders into the Hanawon resettlement center where North Korean defectors are debriefed. The open-house came at a time of increased tensions with North Korea, which in recent months has detonated a nuclear device, launched numerous missiles and amplified the rhetoric directed toward Seoul. Any event having to do with the North becomes an instant news media free-for-all.

The celebration of the center's 10th anniversary was equal parts propaganda ploy, talent show and sob fest. Proud of their efforts to repatriate these lost cousins, South Korea officials produced several North Koreans to show just how fulfilled they were once free of the clutches of leader Kim Jong Il.

These defectors sang! They played piano! They showed off paintings and poetry!

But several later expressed disappointment that South Korea was not the nirvana they had thought. The life they have carved out here is at best bittersweet. While enjoying freedom and creature comforts, many find themselves second-class citizens. They pine for their families and simpler pleasures of home.

"I have memories of the mountains and the rivers of North Korea," said Kim Chu-woong, a 35-year-old concert pianist. "The cigarettes and the alcohol taste different here. Often I get together with friends and we sing the old songs and our eyes get teary."

The wake-up call for this new reality often comes at Hanawon.

About 60% of the defectors are women. Each year, hundreds of refugees spend several months at this leafy center 30 miles south of Seoul. Nearly 90% of the 16,000 defectors in South Korea are Hanawon graduates -- most of whom made their way to South Korea after slipping across the border into China.

They get a crash course in modernity and capitalism, learning how to use a computer and an ATM. But they're also being grilled by intelligence agents trying to weed out spies.

Read the whole article. And read this, too. It's a sort of step-by-step description of the plight of the refugees, and it mentions another organization, Durihana ("two are one"), which tentatively I will say sounds like it deserves some positive attention as well.
Ansŏng [안성시; Anseong], where Hanawon is located, is not that far from most Anglophones living in South Korea. If you can take time out of your busy schedule, consider contacting them and volunteering or helping out in some other way.
on July 13, 2009