A total partial eclipse of the heart Hub

Arvinsign complains that all the icky weather on the peninsula lately may mean that he'll miss the partial solar eclipse that is to arrive on Friday evening at 7:18 p.m. The eclipse will be at its maximum at 7:37, three minutes before sunset, when 27% of the sun will be blocked.

Look on the bright side, Arv: Looking at solar eclipses is one of two things that can make you go blind if you do it too often. 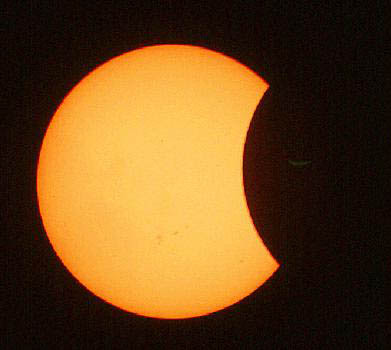 [above: Every few years, ancient peoples in the Japanese archipelago, lacking a full understanding of astronomy, were terrified to witness the deity Pakkuman crossing the sky. To stave off the horror, they would try to throw fruit in its path, lest it come down to earth and devour the virgins or the town, or at least the least skanky of the villagers. Giant gold balls positioned in front of him were thought to give the celestial being the power to vanquish ghosts that had been plaguing the town. Millennia later, men from Ōta, Japan, would harness this legend, developing a popular video game. Okay, I frankly don't know where the hell I'm going with this, so I'll just stop now.]
on July 20, 2009

Email ThisBlogThis!Share to TwitterShare to FacebookShare to Pinterest
Labels: eclipse