Does California have an 8.15 amnesty in its future? 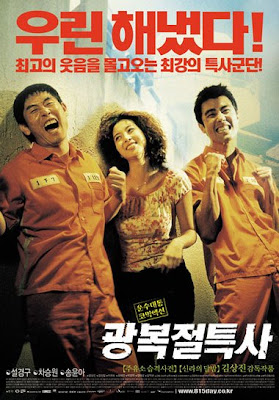 California's serious budget crisis may be bad news for most of you (if you live in California), but it could be good news if you're in prison. According to the Los Angeles Times, less money means fewer dollars to keep convicts locked up, so some convicts are to be sent to county jail while others are set for early release.
On the plus side, I see the potential for an good action flick out of this. Townspeople, led by a no-nonsense warden who's just been laid off, form vigilante groups to fight back against the torrent of hardened criminals that have been released into their midst after the local prison closes down. Governor Schwarzenegger can play the ex-chief of the prison, let go by the budget cuts, right after we oust him in a recall later this year. (When he loses that election, I hope he deadpans this line: "Total recall.") 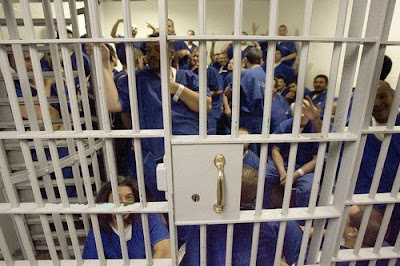 [above: Most of the people in this picture are celebrating news that they may be released soon (the others are forcibly sodomizing prisoners smaller than they). Note the similarity of the response in the poster for the Korean movie Jail Breakers (광복절 특사), up above. Scary. That was a comedy, but this was effin' scary. I just hope that when they start releasing prisoners into the wild, they start with the potheads. The mellow, laid-back potheads who, like the Cha Seung-won character, have a fondness for donuts.]
on July 22, 2009