Oh, geez. I don't know who to support 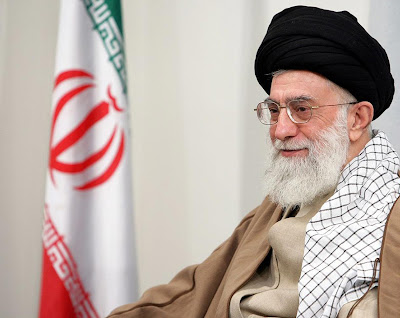 [above: Iran's Supreme Leader, Grand Ayatollah ali Khamenei, playing El Saint Nick at last year's Christmas party.]
We're often told that the real power in Iran is not in the presidency but in the ayatollah who is the Supreme Leader, and the clerics who support him. Reformist clerics have been criticizing the nature (and results) of the highly controversial (and contested) recent election, thus giving support to opposition candidate Mir-Hossein Mousavi.
I really don't like Mahmoud Ahmadinejad and have been hoping that the protests will pick up again and lead to his ouster (Joshua thinks they are), so I'm torn about how I feel about this recent news coming out of Iran: President Ahmeadinejad is defying his patron cleric by refusing to get rid of his new vice president. 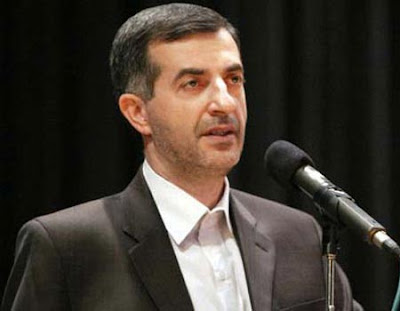 Esfandiar Rahim Mashaei (above) is despised by hard-liners in the Iranian theocracy because he insisted that the Iranians have no quarrel with the Israeli people (something one imagines that the president himself might have trouble saying).

Ahmadinejad surprised many observers by defending the vice president, Esfandiar Rahim Mashaei, an in-law, in the face of a torrent of criticism from his hard-line allies.

News agencies confirmed Tuesday that Khamenei sent a letter to Ahmadinejad on Monday asking for the removal of Mashaei.

"The president should announce the dismissal, or acceptance of the resignation of Rahim Mashaei right away," said Mohammad Hasan Abu- torabi, the deputy speaker of parliament, according to the semiofficial Iranian Students News Agency.

But Ahmadinejad insisted on state television that Mashaei "will continue his job," adding, "he is very loyal to the Islamic Revolution and a servant of people."

So we have bad theocrats, bad president, but good VP. So is the bad prez a good prez for standing behind the good VP? My head is starting to spin.
on July 22, 2009