The Los Angeles Times has a piece on cloned dogs being used at Incheon International Airport. The Labrador retrievers are genetic copies of a successful Canadian sniffer dog, created by Lee Byung-chun, a former colleague of disgraced cloning specialist Hwang Woo-suk.

As was the case with previous dogs cloned at Seoul National University, the cloned sniffer dogs don't have the most creative of names: All six are named Toppy, a not-terribly-clever amalgam of "tomorrow" and "puppy." ("I'd have thought that would be Tomoppy," was one BBC reporter's comment.) 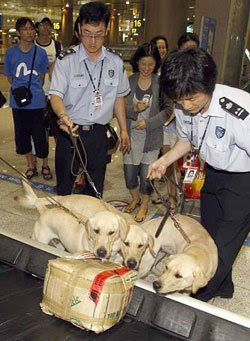 [above: The biggest problem with cloned dogs is that they all go to the exact same place at once.]
on July 22, 2009