The Los Angeles Times has published their most recent edition of "What's up with Charles Jenkins these days?", something of a regular feature in the established American media.
Charles Jenkins's plight is a well-known story in Japan. After crossing the DMZ into North Korea in January 1965, he eventually grew to feel not so happy about his stay as a guest of the state, despite his handlers allowing him to marry one of the Japanese women abducted by North Korean operatives in order to have an army of teachers for North Korea's elite (and that is a true human rights abuse-experiencing language instructor story, kiddies!).
When Japan's then-PM Junichiro Koizumi secured the release of Jenkins's wife, he stayed behind with their children. Eventually, though, perhaps after assurances he would not be treated too harshly for his desertion decades earlier, he agreed to leave, too.
His story has made him a celebrity in Japan, probably just a notch or two below Yonsama, and he is hounded by adoring fans wherever he goes. From the linked article:

With a weary smile, Jenkins poses for a frenzy of snapshots, awkwardly holding a box of specialty cookies. Everyone wants a piece of him, pressing in close to shake his hand and ask him to sign their souvenir snacks.

"One day I counted 300 pictures in the first hour alone," Jenkins recalls in the easy cadence of his native North Carolina. "Then I just gave up counting."

And so begins another day in the bizarre life of a man famous for "the stupidest decision of my life."

In 1965, Jenkins was a U.S. Army sergeant assigned to the demilitarized zone that divides the Korean peninsula, a skinny 24-year-old who was terrified of being sent to what he considered a sure death in Vietnam.

One night, after guzzling 10 beers for courage, he abandoned his sense of duty and freedom as he knew it to stumble across the border into North Korea, a desperate midnight maneuver that led to four lost decades in communist captivity.

Jenkins quickly became Pyongyang's most prized Cold War pawn. He starred in propaganda movies and memorized the inflated political tracts of "Great Leader" Kim Il Sung, enduring a life so dreary and deprived that "most days you wished you were dead." 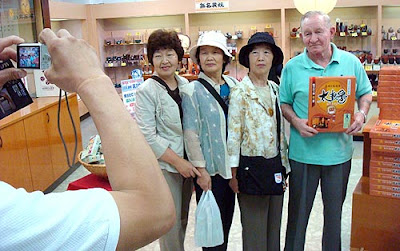 [above: Handy tip for any elderly hakujin in Japan wishing to get free food and feel-ups from middle-aged Japanese women: Pretend you're Jenkins.]
Anyway, some of my loyalest readers might wonder why I'm not being more misanthropic to Jenkins. Why am I not snarkily saying that this defector who helped make anti-American propaganda films deserves to spend the rest of his pathetic life in the Worker's Parahell? Why the double standard with Ling and Lee (and Koss, had he been caught)?
Well, after about four decades, Jenkins had suffered enough. And his acts probably had little to do with creating more hazards for would-be defectors trying to escape North Korea. And to be fair, I don't think Lee and Ling should be "locked up" for too terribly long (and by "locked up," we mean right now that they're being set up in the Pyongyang Palazzo). Sagwa and kyul.
on July 16, 2009