Say hello to Laura and Euna while you're there

We're getting reports that a South Korean fishing boat was intercepted by North Korea and towed into a North Korean port. The crew of four are being ransomed for several hundreds of thousands of dollars each held indefinitely.
Reportedly, it was their GPS navigational system that gave out. And that can only mean one thing: They were probably down in Inchon trying to get on the expressway and after waiting and waiting and waiting while none in a stready stream of taxis, buses, and Ssangyong SUV drivers would let them in, they were forced to go all the way around, somehow ending up crossing the NLL, the de facto maritime frontier. We've all been there.
If past handling of such incidents are any indication, they will be released in days or weeks, but not until they've had a chance to sample a few local delicacies. Meandering across an unclear maritime border is not as serious as crossing a clearly marked border in order to internationally embarrass the regime: twelve days versus twelve years.
In all seriousness, I have in the pipeline a lengthy post on why the maritime borders enforced by South Korea are an extralegal "land grab" perpetrated by the Republic of Korea. I might wait until I'm safely back in Hawaii, lest I get Gerry-remanded (assuming his unorthodox views are really the reason he lost his job). 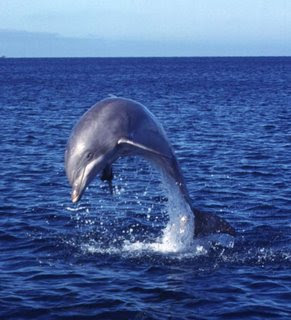 [above: In centuries past, dolphins would guide mariners on the open sea toward land or to large schools of fish. Nowadays, however, they're just as likely to lead you into territorial warriors patrolled by enemy forces, payback for decades of driftnet fishing. This playful porpoise is mocking a local tuna boat by repeatedly hopping back and forth over the Northern Limit Line (shown in blue).]
on July 30, 2009