Was Obama born in Korea?

No. And he wasn't born in any country beginning with a K. But Lou Dobbs and other "birthers" are leading the cry to get President Barack Hussein Obama declared ineligible to be president.
Really, the question has been asked and answered. Move on. Please leave Hawaii State Health Department director Chiyome Fukino alone. She needs her rest.
Seriously, I don't get these people. They are arguing a case that doesn't hold water. Why would State of Hawaii officials lie about this? Why would they risk their own liberty and profession to be complicit in this? And even if it were proven that Obama's mother left Hawaii to go give birth in Kenya, Obama would still be a natural-born United States citizen, so what's the point? Have these people thought that far ahead?
Things like this make me just scratch my head and wonder if I even understand the United States. In October 2004, when Osama bin Laden released a tape designed to frighten the American electorate by reminding everyone he was still out there, voters responded in fear by voting for the person who had spent the past three years not being able to find bin Laden. In 2008, when the two major candidates were one born in Hawaii (Obama) and one born in Panama (McCain), many responded by making a huge deal out of the citizenship eligibility of the one born in the United States.
As some have mentioned, this is a real credibility problem on the part of the GOP. If this were a handful of ultra-conservatives or fringe Republicans blowing this bugle, the Republican Party could ignore their rantings, but this has become a mainstream sour-grapes battle cry whose rattling threatens to knock the GOP off the table and into the trash heap of history. 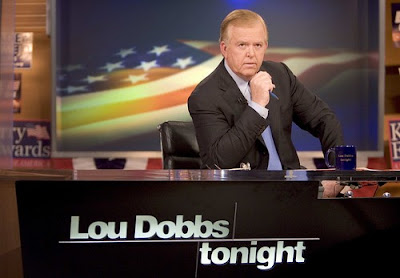 [above: Lou Dobbs hates you.]
And while we're at it, I want to add that Lou Dobbs's prominence on television and his regularly scheduled rants, not to mention the similar message voiced on Fox News and throughout talk radio, makes the xenophobic reports on E2 visaholders' pot smoking look like a freakin' walk in the park. Not that that makes it right (it probably just makes it normative), but geez freakin' Louise, there's a really serious problem with demonization of Hispanics in general — not just "illegals" — and it is festering. While the Chosun Ilbo is a throwback to the bad old days, Korea is marching forward; I'm not so sure I can say the same about the United States. And that makes me very sad.
on July 30, 2009