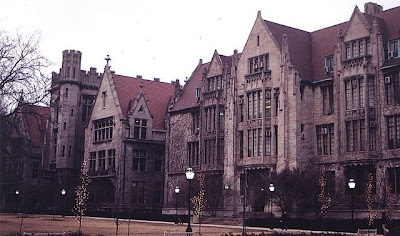 Yeah, I know the "Harry Potter" books and movies are a major cultural phenomenon, but I wonder if this is taking things too far. The Los Angeles Times has a small piece focusing on American colleges that look like Hogwarts. If you're in too much suspense to even click that link, the five are the University of Chicago (above), Yale University, Kenyon College, Bryn Mawr College, and Cornell University. In the comments section, readers list others.
In Korea, I'm not even sure if five places of higher education could make the list. Having attended Yonsei, a school with a 125-year tradition (or so), I have experience with the oldish buildings toward the back of the campus, like Yŏnhŭi-gwan (연희관), which give the school a whiff of Ivy League-ishness, but just a whiff. 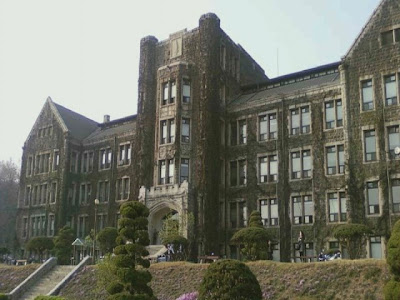 Since I attended, in my UCI undergrad years, a university campus that was constructed only four decades ago — and one whose buildings were so modern-looking that they were used in films to look like the future — I appreciated walking around Yonsei's old stone structures, though the brief time I took classes in them, I was not too happy about the oil-burning heaters that could stink up a room if not used properly (GSIS didn't move to Millennium Hall until 2000, a move we all greatly appreciated). Indeed, it was easy to see why the school year was designed around not having students in classrooms during the two coldest months of winter and the hottest months of summer. I think they have since "modernized" the interiors.
Sadly, few of the universities in Korea have a "Hogwarts" look, though Ewha boasts some interesting old structures. So does 600-year-old Sungkyunkwan, but that's so old, it's pre-European. 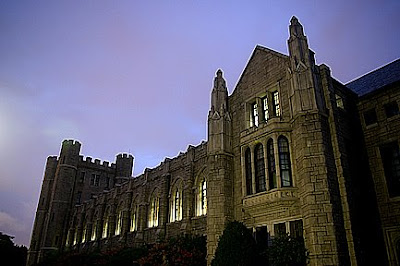 For a Hogwarts-like feel, I think the closest one would get is Korea University, which I am always careful to pronounce as Koryŏ University, per its actual spelling [photo source for above]. One thing that is especially nice about KU is that they have done a pretty good job of making sure the new buildings on the main part of campus fit in with that old style, for the most part. An example would be Centennial Hall, below. 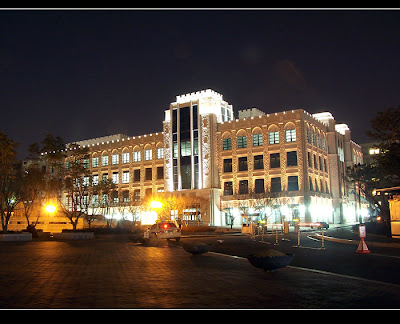 Of course, instead of Hogwarts buildings, what would be a far more interesting find would be someone who looks like Hogwarts students, say Hermione but of legal age (Emma Watson is nineteen, old enough to be sent to Vietnam), though I suppose Cho Chang would be a bit easier. 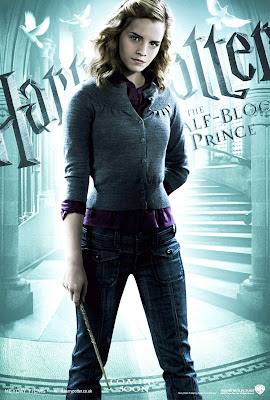