America has a vice president. His name is Joseph Biden and he used to be a senator from Delaware, although he was raised in Scranton, Pennsylvania, which is where "The Office" takes place.
Seriously, either Obama is so high-profile or Biden is so low-key, but I actually go through periods of time where I forget — literally forget — we have a vice president. Sure, it could be Early Onset Gen-Xer Dementia, or maybe the fact that I just have way too much sh¡t falling apart in my life (Kushibo has some major personal things going on, but that's a story for another day).
When he warned — in the New York Times no less — that we should expect sacrifices in Afghanistan, I did a double-take. We have a vice president. And he speaks!
Really, does anyone pay any attention to him? I think the White House sort of keeps him under wraps. Even the Georgia Honor Guard (below) seems more inclined to show off the camera-glamming skills they've learned thanks to the Korea Wave than they are to pay the frickin' VP of the greatest country in the world some frickin' respect!
Seriously, when Bush43 was president, we paid attention to Cheney, if for no other reason than to see if Dick's lips moved when Georgie talked. Al Gore, though a bit stiff, was a major player in Clinton's White House (my favorite headline in the 2000 campaign: "Clinton feels Gore's woody"), and Quayle was always there to be Quayle. Biden, he's just below the radar.
Anybody have any thoughts on how we can put Biden to good use? I mean, he takes in a huge salary, so we should have him do something besides the occasional getting up in front of a microphone and stating the obvious. At least wash my Honda. It's pretty dirty. 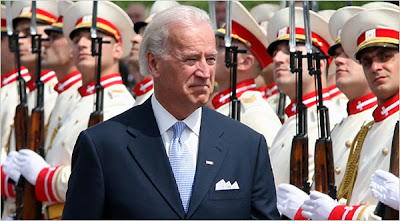