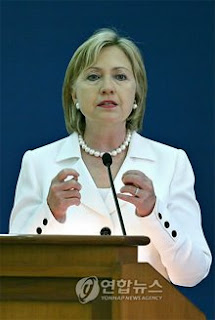 After likening North Korea to a child needing a time-out, Clinton has gone a few years into the future and is sounding more like the leader of a high school clique. Specifically, she's saying she won't talk to North Korea if they both show up to the upcoming ASEAN Regional Forum in Thailand.
It's all good, I suppose, since her stated objective is to only talk with the NorKs if they come to the party six-party talks. I just hope Clinton and North Korea aren't wearing the same dress, because then all hell would break loose.
In all seriousness, I respect the idea to try to get North Korea back to the six-party talks, but that will only work if Beijing and Moscow are completely on board with the geopolitical ass-whipping that Pyongyang needs, and I'm not so sure they are. The advantage of direct one-on-one talks is that it's easier to dangle carrots under Pyongyang's nose (diplomatic recognition, etc.) with clear guidelines for how to get them and how to lose them again, without worry of China and Russia undermining that.
Oh, and did I mention there's nothing we can do about North Korea?
on July 22, 2009