Courtesy of The Marmot's Hole (he'll read Time Asia so you don't have to), we have Mongolian neo-Nazis.
Fascination with Nazi-era chic? Anger about foreigners mixing with local girls? Beating up said foreigners? Why, it's the Korean Wave! (I kid. I kid. I kid because I love... to kid.) 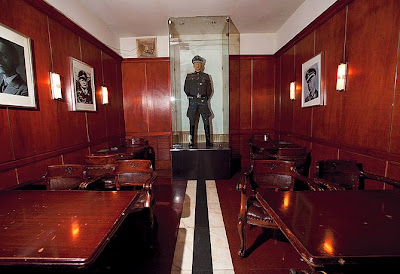 [above: Tse Bar, a Nazi bar in Mongolia whose owner can't find the H key. Full-sized Mongolian in Nazi uniform, only $139 on Ebay. Er... Nazis in glass boxes shouldn't throw scones. Okay, I've got nothing.]
Seriously, though, this is hardly surprising, given the fascination — almost fetishization — of Nazi-era chic in Japan, South Korea, and Taiwan. Mongolia's neo-Nazis actually committing violence in solidarity with the Nazis' eugenics and racist views is a new thing.
Still, criticize East Asia's economic powerhouses all you want for this, but it's not as bad as having real neo-Nazis actually committing real violence. Just sayin'.
on July 20, 2009