Starbucks is changing the name of a store in Seattle so that it will not bear the Starbucks name. The erstwhile Starbucks will be called "15th Avenue Coffee and Tea," a move to reflect the neighborhood in which its located (Seattle Times story here). The de-named Starbucks will also serve wine and beer, which means Seattleites should be wary of wide-awake drunk people roaming the rain-soaked streets. If the idea is popular, they might try it elsewhere. 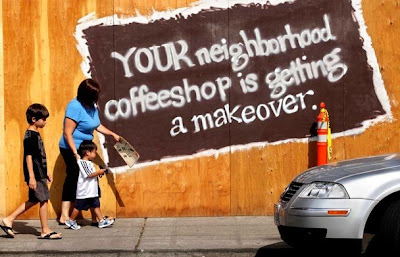 Frankly, I like this idea. I frequent Starbucks in Honolulu when I need to do a lot of work without wi-fi (they charge) and I frequent Coffee Bean & Tea Leaf when I have a lot of work and need to use the Internet (they offer it for free). The Starbucks and the CB closest to where I live both have a strong neighborhood feel to them, and it would be nicely reflected in a name like "Oahu Street Coffee & Tea" or some such. In some locations in Seoul or elsewhere in Korea — especially in neighborhoods that already have a sense of identity if not community — that could work, like Namsan Coffee & Tea, but not COEX Coffee & Tea.
I think about these things too much. I should note that I am not a Starbucks shill.
on July 17, 2009