Teachers + gambling = you in the news

Courtesy of Korea Beat, we have the story of Korean educators getting busted for gambling. And not really high-stakes gambling either, about 1000 won per point in go-stop.

As I mentioned at KB, this is interesting because it combines two things that I’ve mentioned frequently to put all the supposedly “xenophobic” news in perspective.
First, that Korean nationals are often arrested due to anti-gambling laws. Indeed, when the Poker-8 were arrested, a lot of commenters were claiming only foreigners are caught up in anti-gambling efforts, even though I and others were citing cases that contradicted this.
Anyway, the second thing is that these arrestees are teachers. Indeed, it underscores a part of the big picture that the K-blogs tend to miss: that the media assault on foreign teachers is part of an overriding social and journalistic theme in Korean society that teachers in general in Korea (both foreign and local) have been abusing their position of trust and privilege that neo-Confucian society has accorded them.
KoreaBeat noted, by the way, that one difference in this recent news of the educators in Poryŏng (Boryeong) and that of the Poker-8, is that those Korean teachers were not arrested for drugs (actually, only two of the Poker-8 were). And that means this is as good a time as any for the hopelessly innocent Kushibo to ask what the hell this is supposed to be: 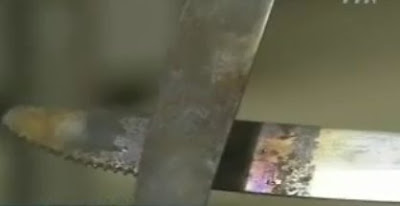 That's a screen shot from the news video of the Poker-8's arrest, something found on the premises there.
on July 21, 2009

Email ThisBlogThis!Share to TwitterShare to FacebookShare to Pinterest
Labels: The Poker Eight