Kia has been in the US for some fifteen years, but you can see by the number of news stories and reviews how much more seriously it's being taken lately.
While some are praising the different-from-expected quality and safety, others are trying to explain how the company whose name has long been the butt of jokes ("killed in action" being a warning that a driver risked death by getting behind the wheel) is now a serious player that makes darned good cars. 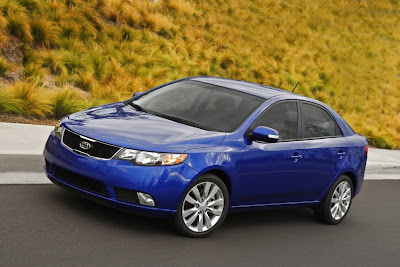 This WaPo reviewer takes a look at the mid-sized 2010 Kia Forte, upon which he heaped considerable praise ...

Fit and finish on our Forte EX was excellent. Interior ergonomics -- ease of sight and ease of use of gauges and controls -- were better than those found in many rival cars. That's "better" as in "better" as opposed to "better for the money."

... before going on to suggest Kia is becoming a success because it does a good job of following the Walmart model:

It is an achievement based on common sense. Wal-Mart consistently offers excellent quality at prices lower than those charged by the competition.

It is an attractive business model that draws consumers from all walks of life, especially in tough economic times. It matters not that Wal-Mart is a nonunion company with a blue-collar persona. Nor does it matter that you are a professional, or a worker holding a union card. If you want the best for less, you shop there.

So here's the deal: The car company that best follows the Wal-Mart example is the one that will own the future of the automobile industry.

Don't be surprised if that company comes from South Korea.

As much as I loathe some of Walmart's business practices (but will give them credit for their paradigm-shifting move toward $4 prescriptions), some of this is apt. And I'm not so sure if towns like West Point, Georgia, really mind that they're not union factories. I think at this point they're just happy to be getting jobs. Let's hope they remain good jobs.
The other thing I found interesting from the review is that the reviewer, Warren Brown, reveals himself to be almost Korean in his driving habits as he describes what the hazards button is for on a car: to tell people behind you on the highway that something is going on up ahead and they'd better be prepared to stop.
Anyone who drives on Korean highways knows how common it is for the flashing yellows to come on, signaling that your 120 kph speed is going to have you careening into them. This is so second nature to me from driving in Korea that I instinctively reach for the hazards button whenever I have to put on the brakes on a highway in Hawaii or California. But that seems a far less common behavior among most American drivers besides me and Mr Warren. But Mr Warren seems to hope that Kia will change that:

Also there's this: In a driving emergency, such as a sudden stoppage of traffic, the caution signal button, indicated by a small red triangle within a larger red triangle, becomes the most important button on the instrument panel. You want to quickly push that button to alert motorists behind you that you are slowing down or stopping because of trouble ahead.

Too many car companies seem to go out of their way to conceal the caution signal button. Their stylists render the button practically invisible and less useful by shrinking its size and blending it within overall instrument panel.

Hear! Hear! I even like his tact of calling it a "caution" button instead. One problem with this is that many American-made cars have the hazards (that is, the turn signals) in red, just like the brake lights, making it harder to notice. Frankly, I've never understood why American cars continue with that convention.
(BTW, here's his take on the Nissan Cube, which is part of the boxy car trend that includes a few Korean models as well, including the Kia Soul.)
on July 12, 2009