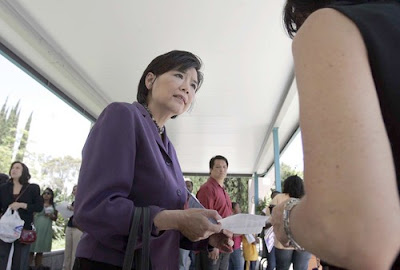 California voters in the San Gabriel Valley's 32nd Congressional District elected activist Judy Chu to the US House of Representatives in a special election. This makes her the Chinese-American woman ever elected to the US Congress, a milestone only about a century and a half in the making.
Asians and Latinos typically are underrepresented in the voter roles, but Asian-American voters account for 13% of the total in the Democrat's Los Angeles County district. She reached out to others, including the "almost half" of the electorate that is Latino. In the end, she won with a whopping 62% of the vote.

[above: In addition to sequestering as many minority voters as possible into a single constituency, the gerrymandered district was also designed to resemble an Imperial Star Destroyer.]
on July 16, 2009