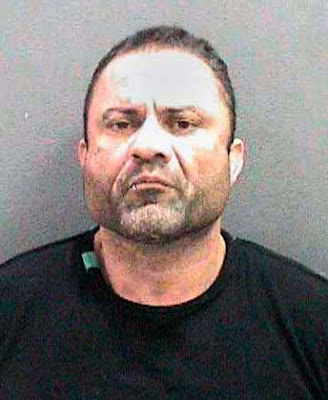 Well, that's what this article from the Orange County Register seems to be saying about Ultimate Fighting Championship star Kimo Leopoldo, who has been reported dead from a heart attack at the age of forty-one:

On the same day of his reported death, Leopoldo was sentenced to 10 days of community service and mandatory participation in a drug diversion program, stemming from a February arrest in Tustin for possession of marijuana while wearing a Long Beach police officer jumpsuit.

Two plainclothes detectives found Leopoldo in a Tustin parking lot dressed in the suit, playing with a yo-yo and leaning against a car in which he had been a passenger.

Leopoldo was waiting for the driver of the car who went into a pharmacy, defense attorney Victor Hobbs said.

The woman who owned the car disappeared after seeing police outside of the pharmacy.

Detectives then searched the vehicle and found a pipe and a small amount of marijuana.

If you're going to impersonate a cop — and I can't emphasize this enough — lose the effin' yo-yo. Cops hate yo-yos. Everybody knows that!
Anyway, Kimo's plan was as simple as it was brilliant: Fake his death, avoid that pesky ten days of community service and the drug diversion program, and watch on the telly one's Michael Jackson-esque funeral and life celebration, replete with weeping fans, before heading down to a retiree village in Baja California's seaside town of San Felipe to live out one's life under the assumed name of Juanito Burns. At least, that's what I assume he's plotting.
[Note: While there is no Korea connection to this story, Leopoldo's first name is Kim, and the guy has lived in both Orange County and Hawaii, which makes a Kushibo connection. If only he'd also lived in Compton, then it would be like we're the same person, man.]
UPDATE:
Kimo shows up at the Orange County Sheriff's Department to show he is alive and, apparently, will serve his time. Will Michael Jackson be far behind? (I must admit, I was sort of hoping the Gloved One had pulled a fast one.)
on July 22, 2009