I spent part of yesterday complaining how the likes of Lou Dobbs are tearing apart the fabric of American society by perpetually demonizing and scapegoating those who are different from them, particularly on ethnic lines, which is why I'm happy to present an image to counter that.
To be honest, I thought it was perhaps a bit beneath the President of the United States to get involved in a controversial arrest when he was asked about it at a press conference, even if it was that of a friend of his.
Sure, the arrest seemed to epitomize the real concerns of Blacks (and Hispanics) of perpetually being regarded with suspicion solely on the basis of their apparent ethnicity or race, and that was a teachable moment. The Black guy was arrested for disorderly conduct after showing ID to a White police officer who thought the Black man might be breaking into what was actually his own house, in an upscale neighborhood. But it did seem to me a bit like the POTUS was using his pulpit to bully the Boston bobby, and that seemed a tad wrong, just for reasons of proportion. 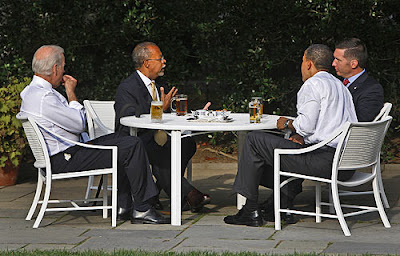 Well, I think Obama brought us another teachable moment, and that was when he brought two sides, each with grievances of their own, together to talk things out over a beer. When this whole thing could have been left for pundits and partisans to bitch and moan about in the media, and when he realized he perhaps had stepped over the line by going after the police officer, Obama took time out of his schedule and modeled the kind of behavior we need if we are going to mend the tattered fabric of an increasingly divisive society. Good on him.
on July 31, 2009