Color me skeptical — for now (Or: You can't spell "pancreatic condition" without C,O,R,E,A)

Joshua at One Free Korea has an interesting piece on the beginning of the end of Kim Jong-il, in the wake of reports that KJI may have pancreatic cancer. I wonder, though, how reliable is the pancreatic cancer claim?
I'm sometimes too skeptical and contrarian for my own good. But to me it seems indeed that the media (South Korean, Japanese, American, and European) are trying to play doctor and guess at what has befallen the Dear Leader based on photographs we have. The pancreatic cancer theory, owing to the difficulty in treating it, is especially juicy because it goes to the prospect of a leadership structural change coming very, very soon. But is there substantial evidence of it? 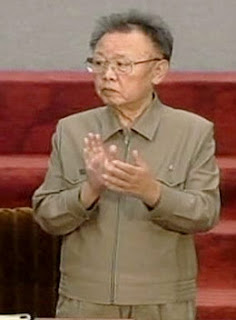 [left: One can see how thin and frail Kim Jong-il looks in this KCNA file photo of the Dear Leader turning off the lights in his office. Contrast that with his porcine and vibrant visage from his 2005 album cover (below).]
In the absence of pancreatic cancer or some other enervating medical condition, his dramatic weight loss and slow gait are easily explained as the result of having experienced and then recovered from a debilitating stroke, and I'm amazed at how few people seem to recognize that. It's like they don't want that simplest of explanations to be true, because they don't point to an earlier demise.
But it remains that even in the absence of any other looming medical problems, the thinness and the weak appearance would persist until death by some other unrelated cause (old age, a bullet to the head, another stroke, being thrown under a bus, etc.).

Strokes caused by blood clots are like being shot with a bullet: Like bullets, the same blood clot doesn't attack you twice (except for that nasty bullet that shot JFK several times), so once you've survived its effects then you only need worry about the next one coming. No doubt the Dear Leader probably is imbibing more Coumadin than cognac these days, lest he get another stroke that could off him completely.

I'm not saying I don't believe the pancreatic story, only that we've seen so many speculations passed off as reliable (or rather, as reliable as we have at the moment), yet he's still here. I think the stroke he likely suffered last year has piqued the global media enough that they are looking for medical problems to pin on him. It's almost as if they are trying to will him into the grave with their reports of his bad health. (And while that would be a silly expectation to have, I think the reports could will people into being better prepared for his death.)
And just like the goofy pile-on of news about North Korea around the time of the DDoS (dramatic distributed denial of service) attacks, I wonder if something something is not up somewhere. I'm skeptical of anything anyone says about almost everything. 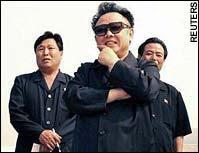 In the meantime, I have no evidence to doubt the pancreatic cancer claim either. All I'm doing is saying that I'm skeptical of the Latest Kim Jong-il Deadly Illness Claim™ of the day, doled out like the K-blogs and the Korean media have become something of a National Enquirer. Again, Kim Jong-il's dramatic weight loss and unsteady step are a natural and common outcome of what we are already fairly certain he has gone through, and that event failed to kill him. The media should recognize that and stop foisting on the public other theories for why he has lost all that weight unless there is substantial backing for it.