If you watch Korean cinema you will recognize Ms Jang [장진영/張眞英] from such films as Singles, Between Love and Hate, or the controversial Blue Swallow, in which she played one of Korea's earliest female pilots, one who may have possessed at least some pro-Japanese inclinations.
Sadly, the popular thirty-something actress with the girl-next-door charm has died of stomach cancer (updated KT article here). The English-language Wikipedia listing says she was born in 1974, while the Korean-language Wikipedia listing says 1971, making her either 35 or 38. 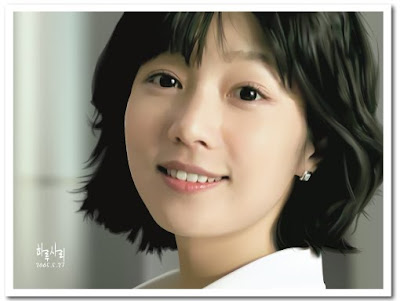 Much of Korean media has been pointing out the sad irony that in the 2003 film Scent of Love she played a woman who died from stomach cancer. Indeed, people in Korea and next-door Japan are especially susceptible to stomach cancer, something I've addressed numerous times in the past.
I personally haven't known anyone who succumbed to this harrowing illness, knock on wood, but those around me who have lost a loved one this way all say that it is a particularly horrible and painful way to die, compounded all the more by the fact that it often takes people at such a young age, often in their thirties or forties.
Jang Jinyoung, requiescat in pace.
on September 01, 2009