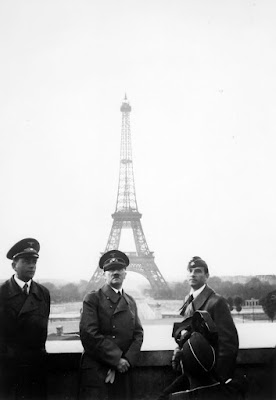 [above: The accidental tourist.]
On this day, the seventieth anniversary of Nazi Germany's invasion of Poland, right-wing* pundit Patrick Buchanan informs us that Hitler wasn't such a war-mongering bad guy after all:

But where is the evidence that Adolf Hitler, whose victims as of March 1939 were a fraction of Gen. Pinochet's, or Fidel Castro's, was out to conquer the world?

After Munich in 1938, Czechoslovakia did indeed crumble and come apart. Yet consider what became of its parts.

The Sudeten Germans were returned to German rule, as they wished. Poland had annexed the tiny disputed region of Teschen, where thousands of Poles lived. Hungary's ancestral lands in the south of Slovakia had been returned to her. The Slovaks had their full independence guaranteed by Germany. As for the Czechs, they came to Berlin for the same deal as the Slovaks, but Hitler insisted they accept a protectorate.

Now one may despise what was done, but how did this partition of Czechoslovakia manifest a Hitlerian drive for world conquest?

Comes the reply: If Britain had not given the war guarantee and gone to war, after Czechoslovakia would have come Poland's turn, then Russia's, then France's, then Britain's, then the United States.

We would all be speaking German now.

But if Hitler was out to conquer the world -- Britain, Africa, the Middle East, the United States, Canada, South America, India, Asia, Australia -- why did he spend three years building that hugely expensive Siegfried Line to protect Germany from France? Why did he start the war with no surface fleet, no troop transports and only 29 oceangoing submarines? How do you conquer the world with a navy that can't get out of the Baltic Sea?

If Hitler wanted the world, why did he not build strategic bombers, instead of two-engine Dorniers and Heinkels that could not even reach Britain from Germany?

Why did he let the British army go at Dunkirk?

Why did he offer the British peace, twice, after Poland fell, and again after France fell?

Why, when Paris fell, did Hitler not demand the French fleet, as the Allies demanded and got the Kaiser's fleet? Why did he not demand bases in French-controlled Syria to attack Suez? Why did he beg Benito Mussolini not to attack Greece?

Because Hitler wanted to end the war in 1940, almost two years before the trains began to roll to the camps.

Hitler had never wanted war with Poland, but an alliance with Poland such as he had with Francisco Franco's Spain, Mussolini's Italy, Miklos Horthy's Hungary and Father Jozef Tiso's Slovakia.

Indeed, why would he want war when, by 1939, he was surrounded by allied, friendly or neutral neighbors, save France. And he had written off Alsace, because reconquering Alsace meant war with France, and that meant war with Britain, whose empire he admired and whom he had always sought as an ally.

As of March 1939, Hitler did not even have a border with Russia. How then could he invade Russia?

Winston Churchill was right when he called it "The Unnecessary War" -- the war that may yet prove the mortal blow to our civilization.

Actually, I'm not so sure he was out to conquer the world as much as to take hold of Europe, at least enough to give Germans a bit of "elbow room." But what do I know? I'm a product of California's public schools.

* I know a few self-described right-wingers who would like to disown him, or break his teeth, or both. They're immigrants or descendants of immigrants, though.
on September 01, 2009