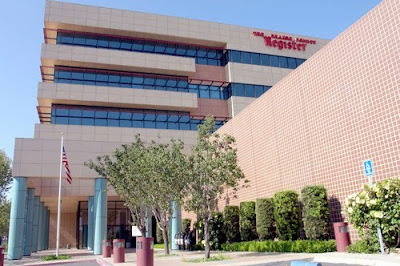 Freedom Communications, the Irvine-based publisher of the Orange County Register, has filed for bankruptcy. Interestingly, I read about this in the Los Angeles Times:

While the arrangement with lenders hurts shareholders, it secures a future for Freedom and its 8,200 employees by "adjusting the balance sheet to a level of debt that projected and current earnings can support," Osborne said.

He said Freedom's financial troubles were a result of the deep recession, which has been particularly hard on newspapers and other media, and of the deal with Blackstone, which occurred during a period of easy credit and saddled the company with too much debt.

The 2004 deal with Blackstone and Providence followed a long-running rift among the descendants of Freedom founder R.C. Hoiles, the libertarian son of an Ohio farmer who bought the Santa Ana Register in 1935. Some family members wanted to keep the company, while others wanted to sell it and cash out their holdings.

A compromise was reached that gave the private equity investors a minority stake in the company for buying out those who wanted to sell and allowed the remaining members of the Hoiles family to retain majority control. The deal failed to reconcile many of the family members who stood on opposite sides of the dispute, and the bankruptcy filing is making matters worse.

"There are a ton of wounds in that family," said a person who knows several of the family members well. If the bankruptcy pushes the family out of the business, "it's going to be an incredibly difficult thing for them to deal with the loss of the Register," the person said. "And it's not a financial thing. It's, 'Oh my God, what would Grandpa say about this?' "

In addition to the flagship Register — No. 30 in the nation in circulation -- Freedom owns 32 daily papers; more than 70 weekly newspapers, magazines and other specialty publications; and eight TV stations.

I guess if they need some advice on how to keep a family-run empire together, they should look to Hyundai, which also has a major presence in OC.
I'm glad they're working out a way to keep the OCR going. Despite their occasional rant on the evils of the US Post Office, they're a good local paper with a strong news setup for statewide, national, and international stories as well.
And even though I like the LAT, I'd hate for OC to be a one-paper metro. Orange County is not an extension of Los Angeles, and with its semi-independent Orange County edition (when I lived there, we called it the Times Orange County), the LAT recognizes that. But competition in news media is a good thing, so I want the OCR to stick around.
Actually, the OC edition of the Times and the OCR lately have been joining forces more than competing. They recently launched a joint advertising section, and the LAT website features links to OCR headlines.
on September 03, 2009