There are reports that Tokyo leads the pack of four candidates trying to get hosting rights for the 2016 Summer Olympics (the other three are Chicago, Rio de Janeiro, and Madrid).

Because of the continental rotation (alternating which continent hosts the summer and winter olympiads), a Tokyo win in 2016 would make it considerably less likely that perennial hosting candidate Pyongychang County (평창/平昌郡; P'yŏngch'ang-gun, aka Pyeongchang-gun) will be chosen in 2018. (And conversely, a Tokyo loss in 2016 but a Pyongchang win in 2018 make for a less likely Tokyo win for 2020.)

Of course, that same continental rotation means Madrid is less likely to be picked in 2016, since Russia's Black Sea summer resort of Sochi was selected when then-President Vladimir Putin showed up at the IOC selection vote and gave everyone the evil eye. 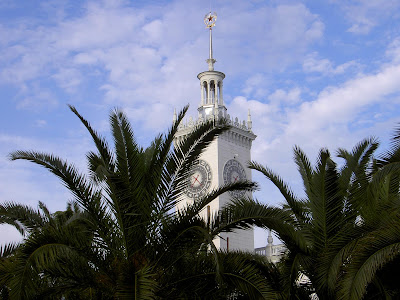 [above: Many visitors to the 2014 Winter Olympics will arrive at the palm tree-lined Sochi Station.]

Actually, I understand that Chicago and Rio de Janeiro, both in the Americas, are favored by this factor, although it's not always followed. Continental rotation hurt Pyongchang's 2010 bid (which followed Beijing's 2008 summer games), but Sochi's choice in 2014 followed the selection of another European city, London, for the 2012 games. Again, there's that evil eye, and maybe a threat to cut off natural gas supplies.

Frankly, I think Pyongchang will fare better as Pyongchang than as Pyeongchang, so I hope the official Romanization reverts back to the McCune-Reischauer form soon (see this comments thread for some reasons why).

Pragmatically, those raised with Roman characters look at that "eo" and don't really know what to make of it, and it triggers something unpleasant (and perhaps unconscious) in their brain. But with the "o," with or without the appropriate breve [ŏ], they can at least guess at it, even if they're wrong.