Okay, more boring blog stuff. A comment on the 100,000th visitor milestone post by The Sanity Inspector (who has several good blogs here, here, here, and here) inspired me to put up a little more data. Again, things that may be of interest only to me. 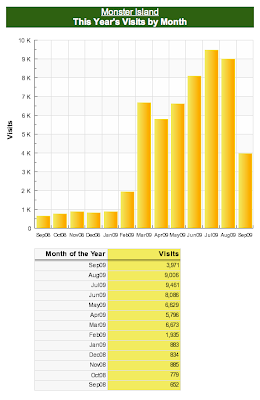 Before I went into retirement and came to Hawaii, I was usually in the range of 100 to 150 hits a day. During that retirement period, before I started blogging again in earnest in the latter half of 2008, I still averaged from 20 to 30 hits a day, mostly from Google searches and from people following old K-blog links or Wikipedia links, especially to the Korea-versus-Corea post.
When I started posting on my blog, I believe the fresh activity prompted Google to move my blog further up the ladder in web and image searches, which led to more hits. My comments on other favorite blogs like Brian in Jeollanamdo or KoreaBeat, even when I didn't leave a link back to my blog, led to more and more hits. One Free Korea, a must-read blog for anyone who is interested in North Korean human rights, also produces a lot of hits.
The huge jump in March 2009 is partly explained by The Marmot putting my once-dormant blog back on his K-blog aggregator. I get a fair number of hits from being in the blog roll of sites like ZenKimchi, Mississippi 2 Korea, Extra! Korea, Ask The Expat, and others (apologies if I'm missing anyone).

If things keep up, by maintaining my average of over 8000 per month, I could hit 200,000 by next September. But the real question is what can I do to hit one million? The answer may lie in my plan for 독도뉴드s.

Now watching: "Inappropriate" on Newsradio on hulu.com.
on September 12, 2009

Email ThisBlogThis!Share to TwitterShare to FacebookShare to Pinterest
Labels: blogging