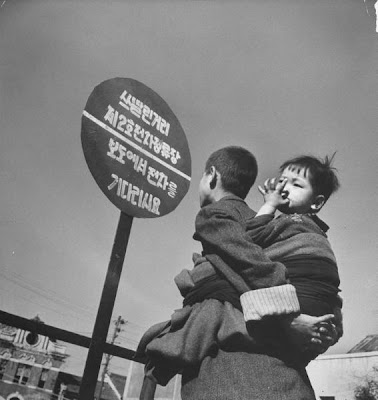 On the off chance that there's anyone who reads my blog but doesn't also read The Marmot's Hole, there is a cool bunch of photos of North Korean stuff, including photos of a mission school that the North Korean communists had converted into a communist training center. Click "Related images" and "more" to see other Life Magazine photos from Pyongyang in 1950. 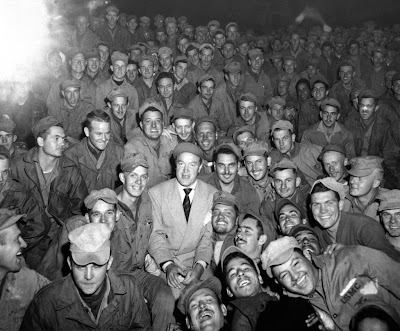 One commenter asks, "How did a Life photog get these pictures in November 1950 and live?" Well, the answer might be that for at least part of November 1950, the Americans occupied Pyongyang. As late as the end of October, I believe, Bob Hope was doing USO shows in Pyongyang (I think I first read about that in the I.F. Stone book, The Hidden History of the Korean War). Above, he's doing a show in Wonsan, on the east coast of North Korea, on October 26, 1950. 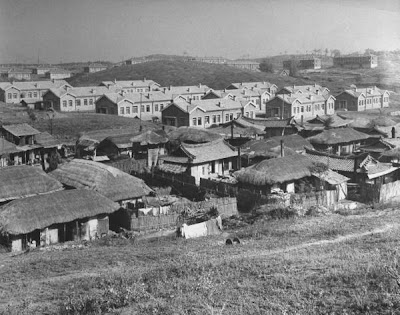 [above: Modern Russian housing next to traditional Korean homes near Kim Il-sung University. Contrary to Japanese imperial apologist claims that the Japanese colonial powers had modernized Korea, there were many people living in pre-modern housing after forty years of Japanese control. Particularly in the South, it was efforts by the Park Chunghee administration to bring housing up to modern standards, starting with the elimination of thatched roofs. This why colorful tin roofs were commonplace in the countryside starting in the 1960s, and still remain in many poorer parts of South Korea.]
The Marmot's Hole link includes a link to a fascinating set of photos of North Korean buses, trams, and cars, some of which look surprisingly sleek (the later ones, that is).
on September 07, 2009