Hawaii versus Korea on swine flu

[above: Koreans are familiar with the phrase "One hand washes the other."]
For all the ridicule South Korea gets in the K-blogs about swine flu (Koreans supposedly not ever washing their hands, Koreans supposedly thinking only foreigners are infected with H1N1, Koreans supposedly canceling any event — including regularly scheduled school — because of one case that pops up), Korea's doing better than a lot of other places at holding back the tide, so far. At least until there is enough of a proper vaccine. Knock on wood (about the "okay so far" status and the coming doses of vaccine).
Like South Korea, Hawaii is an isolated place, to which almost anyone who arrives here has had to fly (boats take quite a while, though there are cruise ships, and you can't drive — "Not yet," says the Mad Scientist). 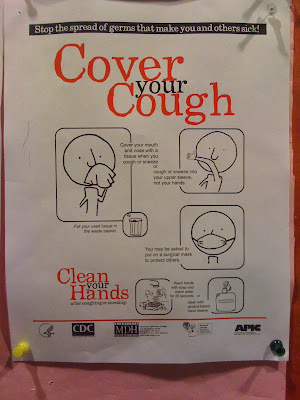 [above: The "Clean your Hands" poster they put up in our dorm after the first H1N1 cases erupted. Other than this poster, which is seen in precious few places around campus, there was little to indicate anything about H1N1 or any other contagion. When there was a minor meningitis outbreak in a freshmen dorm a couple years ago, they didn't do much to inform the dorm-residing public either. They do make all students from overseas get TB tests.]
The top news in the local papers the other day was that Hawaii's H1N1 death toll has topped ten. South Korea last week announced the fourth death due to so-called swine flu. Since we're dealing with such small numbers, Hawaii's 2.5 times higher rate may not mean anything; it would be best to look at overall infections. But since countries are not longer required by the WHO to report confirmed infections, we don't know what those would be.
For all the ridicule on hand-washing, the daily temperature-taking and the urging for people to stay home when they're sick may be having some effect. I entered South Korea twice this summer, and both times I had to pass through two body temperature checks, one on the neck and the other through the heat sensor cameras. 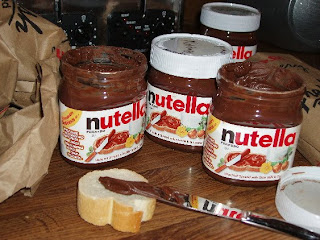 By contrast, I also entered Hawaii twice and got nothing of the kind. They did want to know if I was carrying fruit, though. Boy, do they ever take the fruit thing seriously. California does, too. When the domestic US airlines started using oil sticker shock as an excuse to stop feeding passengers in economy class, I would stock up on munchables for the five- or six-hour flight to California. One day I brought an apple and a banana, packed into my computer bag. The cameras used for picking up on terror activity discovered my fructuous stash and forced me to eat it on the spot or throw it away. Bastards. I haven't been so mad since the TSA enforcers at Heathrow decided that Nutella was a liquid. 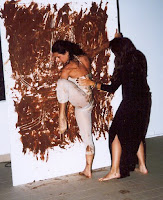 [left: If Nutella were a liquid, could it do this?]
Anyway, except for some new posters stuck up near the elevator of my dorm reminding us to wash our hands (see above), we don't really get much here in Hawaii. And for all the ridicule I mentioned about Koreans not washing their hands, informal observation of people on campus and in the malls reveals that we've only got two-thirds of the population as hand washers (and that may be affected by the observation itself, known as the Hawthorne Effect), and only about half of them are thorough hand washers (e.g., using soap instead of just getting their fingertips wet for a couple seconds). Last night at The Cheesecake Factory, for example, a typical case I witnessed was people looking over at the crowded sinks and just walking on out. Damned tourists (in Hawaii, they are our foreigners). 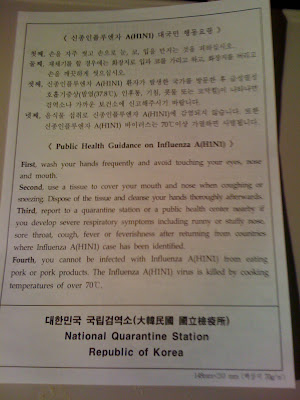 [above: Information pamphlet I was handed on the plane when I arrived in Korea from California, along with the card I had to fill out asking about my symptoms (as well as my seat number on the plane).]
Bear in mind also that South Korea has nearly forty times the population of Hawaii, but with only 40% of the H1N1 deaths so far. That might mean something. Sure, Hawaii is full of tourists that might be arriving from infected areas, but so is South Korea. Incheon International Airport gets 30 million visitors per year, compared with about 22 million by Honolulu International Airport (these two represent the bulk of outside arrivals for each).
I'm not writing this to defend the South Korean reaction; it's more that I wish Hawaii would step up its game a bit. Drive home that "stay home" message, which is what Hawaii is trying to do:

Health officials still are pushing the message that the best thing you can do is stay at home if you are sick.

The goal is to prevent infection as influenza is spread from person to person, Park said. Wash your hands, stay home when you're sick and get your flu shot, she said. The Stop Flu at School program is in full swing, with a goal of immunizing more than 60,000 school children, she said.

"We don't talk about flu for no reason," Park said. "Most healthy people will be fine. Prevention is always preferable to cure. And that's why our focus is on prevention."

The flu shot that they're referring to, though, is not the H1N1 strain, I thought I should point out.
I'm hoping for a sea change in attitudes that one should go to work (or school) even when one is sick. I've been railing against that for over a decade. The SARS outbreak and avian flu put something of a dent in it, and maybe this will, too.
In the meantime, I'm encouraged that swine flu is such a hot topic that it was featured in nine out of the top ten "society" stories on Naver this past week. So caught up in the swine flu craze are South Korean Internet users that H1N1 beat out news of the unauthorized release of nude photos of a member of a popular girl band, which came in at a measly #6.
There is hope.
on September 07, 2009