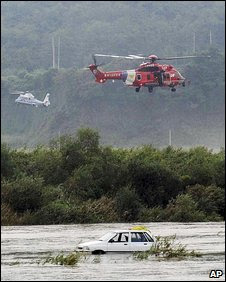 As BBC News reports, it's a distinct possibility that six South Koreans camping along the Imjin River (임진강/臨津江) in the northern part of the ROK were killed when water levels suddenly rose despite there having been no rain.
Flash floods during rainy periods occasionally sweep into low-lying areas near rivers, making this one of South Korea's (thankfully) few natural disaster worries. In 1998, dozens of people camping in Chirisan National Park (지리산/智異山; Jirisan) were killed during flash floods following sudden rains.
But since no rain was reported in the area up near the DMZ, North Korean malfeasance is being looked at as a possibility:

Officials say they are investigating whether the surge came from a new dam in North Korea, further up stream.

They say there has been no rainfall recently in the area at Yeoncheon, 60km (37 miles) north-east of Seoul.

More than 1,000 rescue workers are scouring a stretch of the Imjin river, close to the border with the North.

Although the cause of the flood has not been confirmed, the BBC's John Sudworth says concerns have been raised in the past that North Korean dams could cause both droughts and floods in the South, depending on the time of year.

Indeed, the notion that North Korea could wreak havoc on the South Korean side of the Imjin River or north fork of the Han River, or other shared rivers, is not new. Based on this perceived threat, South Korea began construction in 1987 of the so-called Peace Dam (평화댐/平和댐) along the Puk'an River (북한강/北漢江; Bukhan, the north fork of the Han). The sole purpose of the Peace Dam is to hold back water if the North Koreans deliberately release water from Imnam Dam (임남댐/任南댐), which they began building in 1986, or if the new dam were to collapse.
Back in the 1990s, as construction went on with both the North's Imnam Dam and the South's Peace Dam, progressives derided the ROK dam as government-engineered paranoia designed to keep whipping up public sentiment against Pyongyang. That North Korea would deliberately release flood waters that could inundate Seoul seemed to them, well, far-fetched.
But lest the idea of North Koreans killing vacationing southerners seems a bit fantastical, we have last year's Kŭmgangsan shooting to remind us of what they're capable of doing.
on September 06, 2009