The entertainment news in the US is abuzz with reports that Katherine Heigl of Knocked Up and TV's "Grey's Anatomy" is adopting a baby girl from South Korea this week:

Heigl and husband Josh Kelley have long wanted a baby for a long time and the process has been ongoing for many months.

According to RadarOnline.com, the 10-month-old baby is Korean. Her name is Nayleigh and her nickname will be Leigh.

Heigl always planned to adopt. "I'm done with the whole idea of having my own children," Heigl once told USA Today. "[It] doesn't seem like any fun. I don't think it's necessary to go through all of that."

I know what she means. That movie she was in scared me off procreation too. Um, the ends, not the means. And I don't think any man should ever be compelled to see a baby coming out his wife's vajayjay. But, um, that's another post for another time. 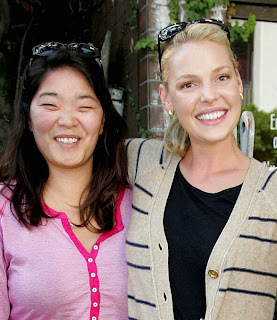 Anyway, she had reportedly been talking about adoption since last year. And with an adoptive sister from South Korea, perhaps the Land of Morning Calm seemed like a good choice.
Some have pointed out that South Korean law now requires a more in-depth process for overseas adoption, and they have publicly questioned how Ms Heigl, who has been married less than two years, was able to adopt so quickly.
Supporters of Ms Heigl point out that this process may have gone more quickly because she's adopting a "special needs child."
It's not clear what the special needs were. This could mean a physical or mental handicap, but the term may also be a euphemism for a mixed-race child. Then again, in the world of South Korean adoptions, "physical deformity" could simply mean the child was born without a penis.
Ah, but I'm not going to beat up Ms Heigl over the past failings of South Korean society toward female babies or children of mixed-race heritage. It's certainly not her fault, and she is trying to do some good, wanting to have a baby but not going off and making a whole new one on her own.
So unless you start making this an semi-annual event, more power to you, Ms Heigl (and hubby). Congratulations!
on September 13, 2009