More news on the mango-vagina front

Steve Lopez of the Los Angeles Times has an article on two controversial billboards that have gone up in Koreatown.
One of them has already come down, a notice by Consumer Watchdog that Mercury Insurance cannot be trusted. The more salacious one is still up, an advertisement for Absolut Mango with an ovalvular depiction that is suggestive of part of the female anatomy. 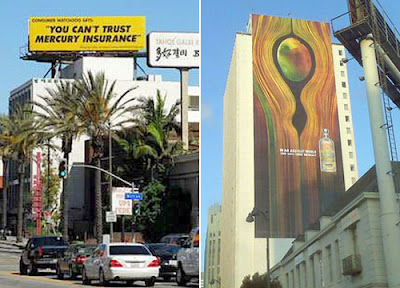 According to Mr Lopez, it "is still eliciting gasps." In Koreatown? Not surprising.
Ah, but what else can you expect with the rampant pornification of America? In fact, I think I just became a knowingly unwitting accomplice in their attempt at viral marketing. And as a public health specialist in training, I can assure you that viral and vaginas do not mix. Well, they do, but they shouldn't.
Monster Islanders are already familiar with how mangos and vajayjays come together, ... er, are intertwined... er, connected, and I wonder if our Swedish vodkameister friends are cribbing from this blog.
Absolut Plagiarism.
Anyway, I suppose some could easily criticize my own apparent preoccupation with Parkaykays and mangos, including the facile disparagement that I need to get laid. And they may be right. Kushibo hasn't had any since Bush was in office.
[sigh] The other Bush.
on September 10, 2009