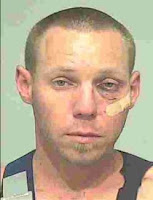 Four suspected White supremacists (with skinhead tattoos) have pled not guilty to a hate crime involving a Latino man they allegedly attacked in Huntington Beach: 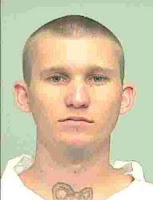 Erin Brooks, 24, Brian Hanson, 26, Michael Powell, 21, and Bret Hicks, 30, also pled not guilt to charges of aggravated assault with hate crime enhancements which could lead to 20 years in prison each. The suspects did not comment during today's hearing and were represented by private attorneys.

The four people are being identified as white supremacists based on their tattoos, which say "Skinhead," "White Pride" and "Hate" and have references to "Heil Hitler" and a Nazi swastika, prosecutors and court documents said. 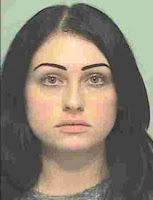 The original crime was written up here.:

Reinhart said three men and a woman were circling the Oak View community, a predominantly Latino neighborhood in Huntington Beach, about 11:55 p.m. July 3 to hurt someone who is "non-white," Reinhart said.

When the group found the victim standing in an alley speaking with another person, they attacked, yelling racial slurs, Reinhart said. The Orange County Register is excluding the victim's name because of concerns for his safety.

The victim was stabbed three times, fell to the ground and was punched and kicked when neighbors came to his rescue, Reinhart said.

"Apparently, several people from the neighborhood jumped in to assist the victim and beat up the suspects," he said. 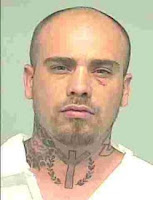 That people would be so whipped up to hatred against another race or ethnicity to go and seek out people to attack and possibly kill is disgusting. Absolutely disgusting.

But as one might expect, the OCR's commentariat — with its mix of Latino- or minority-bashing and more level-headed thinkers — has some coming to their defense:

While blanket hatred is totally counterproductive, the paper does not mention the "victims" background nor his affiliations. What was said or done leading up to the incident. It is true that we have sanctioned People of Color actions and sense of entitlement by making it o.k. for them to publicly proclaim the fact that they are "Brown and Proud" as well as offer immigrants so many rights and bonuses that they feel we owe it to them. This is a perfect example of "today's perks; are tomorrows expectations." When a white publicly states the same sentiment, they are viewed as ignorant inbreeds. After reading many of the posts, I can see why. However, I am able to see their point; which is we have crossed the line of tolerance and entered into a forum of reverse discrimination. No excuse for what these people supposedly did but I highly doubt that is what happened.

Yep, "brown and proud" makes me want to go drive through a Hispanic community and beat up some random Latino person. More likely, the knee-jerk attitude among many Whites in Orange County (and the rest of Southern California) that any Hispanic they see is probably an illegal (a view that comes through in the OCR comments section sometimes) is actually a greater contributor to the antisocial anger and violence of these four.

Among the more level-headed responses:

I love it when people blame their own inadequacies on other races. Um, for the record you probably can't find a job NOT because someone else (i.e. a "minority") "took it" from you. But rather because of your poor work ethic, bad attitude, lack of experience, or unprofessional appearance.

True in California and other parts of the US where I've lived.
on September 05, 2009