San Bernardino crime of the day 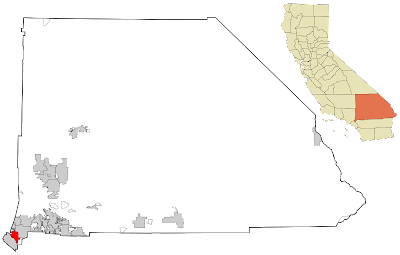 [above: The corona of San Bernardino is a poor man's Anaheim Hills known as Chino Hills. Interestingly (and coincidentally), SB County's corona is just north of a Riverside County city actually called Corona. Weird, huh? Aren't you glad you take the time to read these little tidbits in the picture captions?]
Anyway, so I figure that that connection with OC makes SB fair game for "crime of the day," especially if it's something that pisses me off. Which this does.
Authorities in San Bernardino arrested a woman today that they are accusing of boarding twenty-two mentally ill, elderly, and other people in "prison-like conditions." Some were housed in converted chicken coops behind razor wire.
From the Los Angeles Times:

“The stench was pretty horrific,” Penman said. “These were very squalid conditions.”

The people were being held in dilapidated buildings, some without running water or toilets. The facility is not licensed with the state or the city, Penman said. Two milk box crates containing prescription medicines were found at the site. At least two of the residents were in wheelchairs.

Police arrested Dalton after going to her home in the 2800 block of North Golden Avenue to arrest a man with outstanding warrants for drunk driving, according Penman said.

The elderly, the mentally ill, and children are among our most vulnerable citizens, and anyone who would do what Pensri Dalton is accused of doing deserves some hard time. Kushibo has a close relative in the latter stages of Alzheimer's and I would hate to think that someone would do this to him or the folks who are residing with him. Breaks my heart.
on September 05, 2009