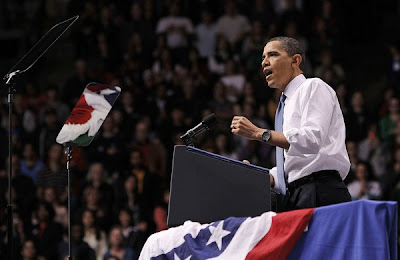 As Obama postpones his trip to Asia to make a final push for his "historic" healthcare bill, it's been a string of good news lately for the White House and Congressional Democrats inching ever forward toward passing Obamacare.

First we have the Congressional Budget Office declaring that the bill before the House will reduce the budget while covering tens of millions of people, then we have more and more Democratic holdouts agreeing to support it, including left-leaning Dems like Kucinich who feel it doesn't go far enough and blue-dog Democrats who are worried about fiscal irresponsibility.

And now we have news that the American Medical Association is endorsing it as well:


“The pending bill is imperfect, but we cannot let the perfect be the enemy of the good,” the AMA's president, Dr. James Rohack, said in a conference call with reporters. “Key to our deliberations on this legislation was the fundamental fact that the status quo is simply not acceptable.”

Rohack called the pending congressional action on healthcare, “an opportunity that we are not likely to see again for at least a decade,” and said that under the bill, “the patient-physician relationship is protected.”

Rohack said the AMA was pleased that the bill would extend coverage to millions of Americans, provide investment for quality and wellness, and reduce administrative burdens.

The AMA isn’t so pleased with the creation of an independent payment board that would have jurisdiction over Medicare spending. Rohack said the board “could result in misguided payment cuts.”

I smell an attempt at a little quid pro quo in the works, though:


The association is also pressuring Congress to pass a separate bill to repeal the formula that has caused a looming 21% cut in Medicare payments to doctors. In an earlier version of healthcare legislation, the House included a provision to address this issue – nicknamed the "doc fix" – but it isn’t in the final bill. (It carried a price tag of nearly $250 billion.)

“We will hold Congress’ feet to the fire on getting that done before this Congress adjourns,” Rohack said.

I agree that the bill is not perfect, but it does an awful lot of good stuff and not a whole lot that's bad. And frankly, as the AMA suggests, it will be easier to pass the bill and then add what's missing or take out what shouldn't be there after it passes than to start from scratch and make a perfect bill.

Representative Kucinich's suggestions on a single-payer system (which works well in South Korea and other countries) or a public option, for example, may be more palatable once people see how Obamacare is working.

The only thing I'm really disappointed in, though there's still time for this, is that Obama could get/have gotten a few progressive Republicans on board in exchange for promises to push for passage of the FTAs with South Korea, Colombia, and Panama, or at least the one from South Korea, which would seem to have fewer ethical concerns than the one with Colombia. In fact, a politically savvy president could have assured that there would have been no filibuster in the Senate with such a grand gesture.