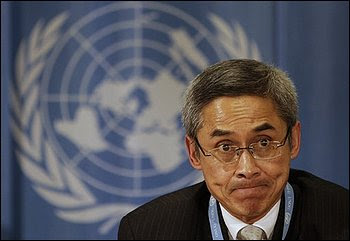 A report by the United Nations on human rights in North Korea is laying blame for the "widespread suffering" of the North Koreans on the Great Currency Obliteration of 2009, coupled with a poor harvest.


The revaluation was one of a series of “draconian” economic steps taken in the impoverished country, Vitit Muntabhorn said in a report to the UN Human Rights Council in Geneva. The regime also barred foreign currency, closed markets where people had traded produce, and prohibited small-plot farming that had been allowed, he said.

Citizens were ordered in November to exchange 1,000-won notes for new 10-won bills, the country’s first currency change in 17 years.

The 2009 harvest, hindered by lack of fertilizer and fuel, a drought, and declining soil fertility, yielded a cereal shortfall of 836,000 tons, Muntabhorn said.

North Korea’s leaders should “rectify the distorted pattern of food distribution” and cooperate with UN agencies trying to deliver aid, Muntabhorn said. The government should also “allow people to undertake economic activities to satisfy their basic needs and supplement their livelihood without state interference,” he said.

Reuters and AP are also carrying the story.

North Korea's diplomat in Geneva is rejecting the report, of course, even as Kim Jong-il has acknowledged, to some degree, that what the report is saying is true.

Now the question is, just what (if anything) will the United Nations do about it?

Email ThisBlogThis!Share to TwitterShare to FacebookShare to Pinterest
Labels: famine, The Great Currency Obliteration of 2009