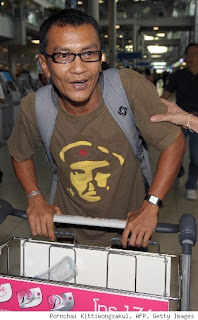 John has sent me a link to the case of Nyi Nyi Aung, the son of a Burmese pro-democracy activist, who was arrested upon arriving in Burma and held for half a year:


Six months ago, a man named Nyi Nyi Aung landed at the Yangon International Airport in Myanmar (formerly known as Burma). He had come to Myanmar in the hopes of visiting his mother, who is currently in jail for pro-democracy activities and sick with cancer. Before he could clear customs, Aung's baggage cart was seized by airport personnel and he was told to come into their offices to answer some "personal questions." Although Aung has a background as a human rights activist, and was a prominent leader during Burma's 1988 uprising, he had broken no laws. Perhaps more important, Aung is also an American citizen, which should have provided some insurance against wrongful incarceration.

Once inside the airport offices, Aung said he was interrogated about his political activities and contacts by military security from both the Myanmar Air Force and Navy. He was then handcuffed, blindfolded, and driven for several hours to an unknown destination. While in the car, Myanmar police threatened to beat and kill him. When Aung was finally dropped off at an interrogation center, he was placed in a small, dark room, handcuffed to the table and kicked repeatedly while security officials grilled him on purported terrorist activities.

John notes that it was interesting how little fanfare this got (I admit I hadn't heard about it), and he sarcastically wonders why Lisa Ling wasn't helping him out.

Indeed, it is disturbing that American citizens can be left to rot in foreign jails when they haven't actually committed any crime or grievance other than pissing off another government for just being. I guess the permanence of the military junta that controls Burma has just worn people out and they don't pay much attention to what goes on there, even when Americans are thrown in jail for visiting a sick mum.