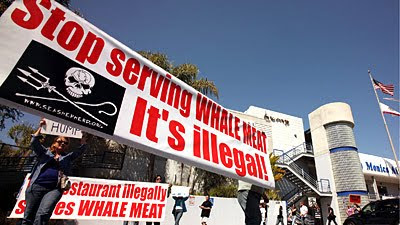 In an update to this story, the Los Angeles County restaurant being charged with serving banned whale meat has closed. This followed protests like the one shown above.

And they seem to have found religion on the subject. From the Los Angeles Times:


A Santa Monica sushi restaurant facing federal charges for serving endangered whale meat appears set to close its doors Saturday, according to a statement posted to The Hump's website Friday which called the decision a “self-imposed punishment."

“The Hump hopes that by closing its doors, it will help bring awareness to the detrimental effect that illegal whaling has on the preservation of our ocean ecosystems and species,” read the statement on the restaurant's longstanding website.

Given the litigiousness of the US in general and California specifically, I'm actually impressed that they would admit that they would so clearly and unconditionally admit and apologize for "our illegal actions."

The charges came after an undercover sting operation (Isn't that redundant? Can you have a sting operation that isn't undercover?) orchestrated by followers of Louie Psihoyos, the director of Academy Award-winning documentary The Cove, about dolphins slaughtered in a national park in Japan's Wakayama Prefecture.

That's the same Mr Psihoyos who is currently in Seoul protesting Japanese whaling in front of the Japanese embassy, but not protesting against South Korea's own shadow whaling efforts. 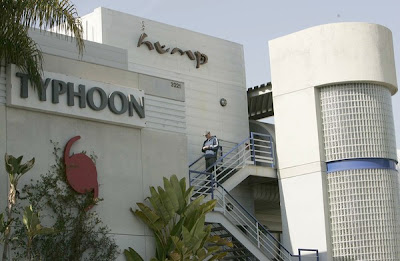 Email ThisBlogThis!Share to TwitterShare to FacebookShare to Pinterest
Labels: save the whales