Catholic Church again reveals its ambiguity about An Chunggŭn

The Korea Times is reporting on Cardinal Nicholas Chŏng Chinsŏk [정진석] stirring controversy on the centennial of uber-patriot An Chunggŭn's execution for the assassination of Japan's former Resident-General of Korea, Itō Hirobumi, "Ahn's patriotic act" (the KT author's decidedly subjectivity-soaked words) which many believe triggered or at least provided cover for Imperial Japan's forced annexation of the Taehan Empire, as Korea was officially called at the time:


In his sermon this week, which marks the 100th anniversary of Ahn's patriotic act, Cheong said the church's decision 'to suspend the priesthood of a Western priest for three months for his sympathetic involvement in Ahn's final days before the latter's execution was a "best decision" to protect the priest, Hankyoreh said.

Indeed, it seems the KT writer decided to do a bit of a smear job on Catholics in general rather than addressing the Cardinal's remarks about An Chunggŭn specifically:


Some Catholic priests' acts in Korea under the Japanese colonial era drew mixed views from scholars.

While some Western priests in Korea at that time were sympathetic toward the Korean underground fighters against Japanese occupiers and helped them, some also tipped the activities of the underground Korean fighters to the Japanese authorities, leading to, for example, the arrest of the 105 Korean patriots, it said, citing theologian Park Young-dae. 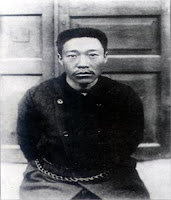 I don't know who he is, but I'd be willing to bet dollars to donuts that Park Youngdae is either a Presbyterian with an agenda or is relying on "scholarship" produced by Presbyterians with an agenda. While the vast, vast, vast majority of Catholics, Protestants, and Buddhists in Korea have engendered a spirit of mutual co-existence and even friendship (witness President Lee's own recent remarks about the recent deaths of respected Buddhist and Catholic figures), some have sought to take a page out of the Fundamentalists' playbook back in the US, sowing seeds of religious or sectarian intolerance where there hasn't been much in the past century. Bringing up the allegedly collaborationist activities of other Catholic clergy in a discussion about the one related to the case of An Chunggŭn seems an example of that.

In the past (see here and here) I've stated my own views on An Chunggŭn, who I think saw himself as a patriot but who ultimately played a predictable negative role in Korea's history, though he is nevertheless celebrated — and his narrative distorted — solely because he struck a blow to such a prominent Japanese politico of the day.

I think it is wrong that discussion of his role, whether positive or negative, is stifled by people who make use cries of "anti-patriot" or "pro-Japanese" like some sort of neo-McCarthyism. One can reasonably feel, as I do, that Imperial Japan's takeover of Korea was cruel, unnecessary, illegal, reprehensible, and by no means inevitable, while also feeling that An Chunggŭn should not be revered as a hero.

UPDATE (3/29/2010):
The Western Confucian notes that the purpose of the Cardinals words was to express "regret that 'the Korean Catholic Church hadn’t recognized An as a good Catholic.'" Though I disagree with this point and feel it is the Catholic Church in Korea caving in to nationalist sentiments, it seems all the more that the Cardinal and the church has been the target of a sectarian smear.

The Western Confucian also links to a more thorough and accurate retelling of the Cardinal's words.

Email ThisBlogThis!Share to TwitterShare to FacebookShare to Pinterest
Labels: An Chunggŭn, Catholicism, religion in Korea