Dear Leader to be dead leader by 2013

I hope I never become so evil that people speculating on my impending death becomes global news. Really, if I'm ever that evil, just shoot me*.

But that's what happens with Kim Jong-il, whose myriad potential health problems are frequent fodder for Pyongyang watchers. From AP:

Campbell based his estimate on medical information, the report said, citing unidentified sources.

U.S. Embassy spokesman Aaron Tarver said he had no details. Park Sun-young, an opposition lawmaker who attended the Feb. 3 meeting, said Wednesday that she had no comment.

A state-run South Korean think tank, the Korea Institute for National Unification, also said in a January report that Kim Jong Il probably wouldn't survive past 2012. It cited no specific evidence for the estimate. 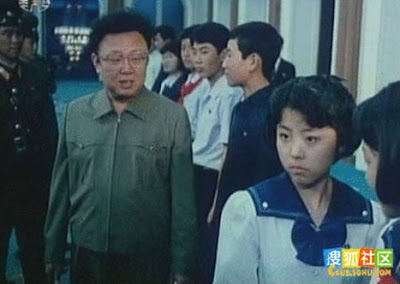 [above: Why... won't... you... just... die already?!]
Sounds like we need to break out the Kim Jong-il death pool (Hey! Carter's in town!). I still think the guy's going to be around for longer than we care to imagine. See, wishful thinking isn't really much of a poison.

* You'd probably better not really shoot me. I'm evil, see, and that means I would probably have my people hunt down you and your people and rip out everyone's fingernails before they do horrible things to your disfigured shell of a body and then kill you. Or I'll just come back from the grave to do it myself. Don't mess with evil Kushibo.