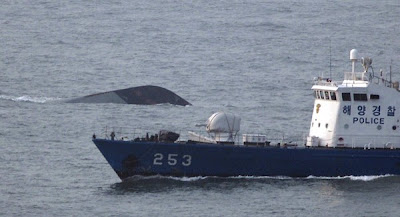 I just don't know what to say. It's a tragedy whenever this kind of thing happened — dozens of people probably dead — but there's a huge question of whether this was some deliberate act, an accident, or something else.

That is, did North Korea fire on this boat or perhaps sink it with a mine? Was it an accident on the part of the ROK Navy? Fortunately, no one seems to be flying off the handle, so we can take the time to see what the evidence points to. I don't even want to speculate, then, about how Seoul should react if it turns out that the North was responsible for this. Let's just wait and see.