UPDATE:
The Washington Post has published its own report on the East-West Center paper.

ORIGINAL POST:
A study by the East-West Center right here in Honolulu is suggesting that very thing. From AP:


There is mounting evidence that Kim Jong Il is losing the propaganda war inside North Korea, with more than half the population now listening to foreign news, grass-roots cynicism undercutting state myths and discontent rising even among elites.

A survey of refugees has found that "everyday forms of resistance" in the North are taking root as large swaths of the population believe that pervasive corruption, rising inequity and chronic food shortages are the fault of the government in Pyongyang -- and not of the United States, South Korea or other foreign forces. The report will be released this week by the East-West Center, a research group established by Congress.

The article elaborates on how and why this is happening:


The number of starvation deaths in South Pyongan province, in the center of the country, is in the thousands since January, according to Good Friends, a Seoul relief group with informants inside North Korea. It said bodies of malnourished elderly people were being found in the streets of Pyongyang, the capital, and it quoted unnamed party officials as saying that starvation has risen in some areas this winter to levels unseen since the 1990s, when famine killed as many as 1 million North Koreans.

This mix of deadly food shortages, bureaucratic bumbling and rising cynicism presents a potentially destabilizing threat to Kim's government. It comes at a delicate time, when the ailing 68-year-old leader has launched a secretive process to hand power over to his untested 27-year-old son, Kim Jong Eun.

"Once a government has so badly damaged trust, it may be very difficult, if not impossible, to restore its credibility," said Marcus Noland, co-author of "Political Attitudes under Repression," the new report on a survey of North Korean refugees.

But there's always that question of whether this will lead to any type of change. Many political scientists feel this is unlikely because of lack of organization among the disgruntled masses. But as I suggested here, I think a critical mass — not unlike what happened with former Soviet Bloc countries like East Germany — may be a better working model. In other words, sheer numbers of disgruntled in the middle ranks or higher — the gatekeepers of power and the enforcers of the regime's control — may bring us to the tipping point, which the article suggests:


Although Kim's government appears to be losing the hearts and minds of North Koreans, there is little or no indication that organized opposition has emerged inside the country, said Noland, deputy director of the Washington-based Peterson Institute for International Economics.

But signals of internal stress are growing, according to another new report on conditions inside North Korea. The International Crisis Group, an independent group that advises many Western governments and U.N. agencies, said last week that pressure from the deteriorating food supply and "disastrous" currency reform "could have a number of unanticipated consequences for regional international security. A sudden split in the leadership, although unlikely, is not out of the question."

So much happening. As I've stated before, particularly with the unforeseen consequences of the Great Currency Obliteration of 2009, we may be witnessing the beginning of the end. 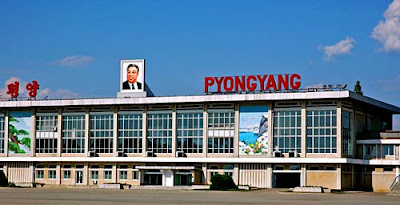 [above: As soon as the DPRK regime collapses, South Korea's first goal is to add an E to that sign.]

Email ThisBlogThis!Share to TwitterShare to FacebookShare to Pinterest
Labels: North Korea, The Great Currency Obliteration of 2009